The father of one of the victims of this week’s plane crash in the French Alps has called for airlines to take greater care over pilots’ welfare.

Prosecutors say they believe German co-pilot Andreas Lubitz deliberately slammed the Germanwings aircraft into a mountain, and that he hid an illness from his employers including a sick note for the day of the crash.

“I believe the airlines should be more transparent and our finest pilots looked after properly,” said Philip Bramley on Saturday, from Hull in northern England. “We put our lives and our children’s lives in their hands.”

His 28-year-old son, Paul Bramley, was one of 150 people killed in Tuesday’s disaster.

Speaking near the site of the crash, Philip Bramley said Lubitz’s motive was irrelevant. “What is relevant is that it should never happen again. My son and everyone on that plane should not be forgotten, ever,” he said.

Germanwings, the Lufthansa subsidiary that Lubitz joined in 2013, declined on Saturday to comment when asked whether the company was aware of any health problems he might have had, the Associated Press news agency reported. But it said he had passed all required medical check-ups.

Aviation experts say those checks are stringent, but focus mainly on physical health. A pilot’s mental state is usually only assessed once, before companies decide whether to admit them to a training programme. Even then, a determined person could hide a latent problem.

“The test that will get you into a Lufthansa flight training programme is a very hard test and this is why most people who get into those pilot classes will train for those tests,” said David Hasse, the editor-in-chief of German aviation website airliners.de.

“There are coaching facilities, companies that are specialised in training people on how to pass those tests, and they will also advise you on how to behave in the psychological tests.”

Lufthansa said pilots are required to pass an annual medical test overseen by the German Federal Aviation Office, but the company itself does not perform checks on its staff and relies on them to report any problems.

German prosecutors, who have been trying to determine what caused Lubitz to take such a devastating decision, met with their French counterparts on Saturday to discuss the preliminary findings of their investigation.

Dusseldorf prosecutors say Lubitz hid evidence of an illness from his employers, including a torn-up doctor’s note that would have kept him off work the day authorities say he crashed Flight 9525.

The Germanwings Airbus carrying 144 passengers and six flight crew members crashed when Lubitz locked the captain out of the cockpit and stopped him from getting back in, according to an analysis of recordings from the plane’s cockpit voice recorder. 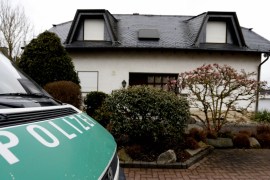