The offensive to retake the Iraqi city of Tikrit from the Islamic State of Iraq and the Levant (ISIL) has restarted, the Pentagon said.

The announcement came after two days of US-led coalition air strikes and the withdrawal of Iranian-backed militias from fighting.

A US spokesman called the departure of three Iranian-backed militia groups a “welcome” development, but some militias said they had withdrawn in protest at US involvement.

Colonel Steve Warren said there were three air strikes on Friday in support of the operation in Tikrit, and even without the Shia militias, about 4,000 Iraqi troops and Shia volunteer fighters were taking part in the offensive, which he said was “enough combat power to get the job done.”

“Iraqi Security Forces are beginning to maneuver into the city, in an effort to push ISIL out of Tikrit,” Warren told reporters at a Pentagon briefing.

The Pentagon estimated the number of ISIL fighters still holding the centre of Tikrit to be “in the hundreds”.

“Those Shia militias that are linked to, infiltrated by, or otherwise under the influence of Iran are completely sidelined,” Warren said, “So their departure from the battlefield is welcome.”

Warren said the decision by the Iraqi government to switch from Iranian support to US coalition support in retaking Tikrit, was based on an ineffective strategy that was being directed by Iranian advisers, and had resulted in a stalled offensive.

Naim al-Uboudi, the spokesman of Asaib Ahl al-Haq, one of the militias that pulled out of the offensive, accused the US of trying to take credit for gains they had made.

“We were able to conclude the battle ourselves, but the US came in order to usurp this major victory,” he said.

Jaafar al-Husseini, a military spokesman for Kataib Hizbollah, another militia, criticised Prime Minister Haider al-Abbadi for inviting the coalition to join the battle for Tikrit.

ISIL took control of Tikrit in June last year as part of an offensive in which the group seized large parts of northern Iraq. 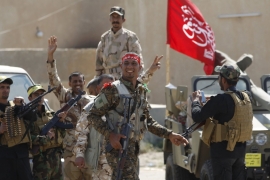 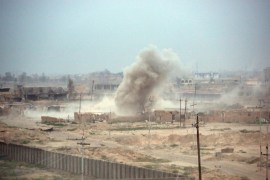 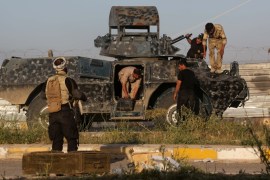 An operation commander says Iraqi air force strikes have been limited and not accurate enough to support ground forces.