Reports from Yemen say President Abd-Rabbu Mansour Hadi and his top military commander are on the run while other military leaders, including the defence minister, are under arrest after Shia Houthi fighters entered the southern city of Aden.

However, two senior Yemeni officials including the head of national security have told Reuters news agency that Hadi remains in Aden and has no plans to leave.

The developments came just hours after a television station said Houthi fighters and their allies had seized an airbase where US troops and Europeans helped the country in its fight against al-Qaeda.

The Al-Masirah TV station reported that the Houthis had “secured” the al-Annad airbase near the town of Lahij, and claimed the base had been looted by both al-Qaeda fighters and troops loyal to Hadi.

That airbase is only 60km  away from Aden, the port city where Hadi had established a temporary capital.

Witnesses said they saw a convoy of presidential vehicles leaving Hadi’s palace, located at the top of a hill in Aden overlooking the Arabian Sea, the Associated Press news agency reported.

Saud Al Faisal, Saudi Arabia’s foreign minister, had previously warned that his country would take “necessary measures” if the Houthis did not resolve the crisis peacefully, without elaborating further. 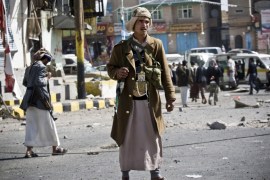 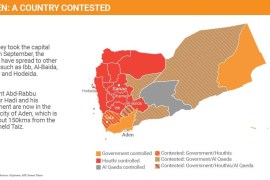