At least 640,200 Syrians are living in areas under long term siege in the country’s raging war, a report released by the Syrian Medical Society (SAMS) says – more than three times the estimate of the UN Office of the Coordination of Humanitarian Affairs (OCHA).

The report, Slow Death, is based on documentation of the lives and deaths of Syrians in their home country, giving a detailed and graphic account of the recorded cases.

Twelve million people in Syria are in need, that is not one disaster that is 12 million disasters.

The information in the report was gathered through interviews with medical professionals inside Syria and from written reports.

As of February 2015, OCHA officially recognised 11 besieged areas in Syria with the estimate of 212,000 civilians living in them.

The SAMS reports identified 38 additional communities that met their definition of besieged but had not been designated as such by OCHA.

Jens Laerke, a spokesperson for OCHA, told Al Jazeera that the reason figures were different is because of the difference in methodology and definitions that were used by each organisation.

“This [laying siege] is an illegal and outrageous tactic used by more than one side. It is catastrophic for the people inside those areas, we can only do so much,” Laerke said.

“We as humanitarians have no answer to these tactics being used; we can only do our jobs and help those people in need by delivering humanitarian assistance. Twelve million people in Syria are in need; that is not one disaster, that is 12 million disasters.”

“We recently launched a campaign on social media called “What does it take” which expresses the deep frustration felt by all international humanitarian organisations,” Laerke added.

The report describes how the hundreds of thousands of Syrians living in the besieged areas are denied basic necessities such as food, water and medicine.

Hundreds of deaths have been reported from preventable causes, such as starvation, dehydration and lack of medical care.

The medical group demanded through their report that UN agencies immediately revisit their besieged designations and consider the inclusion of the additional areas.

Through military checkpoints, civilians are restricted entry or exit to those areas.

Access to those areas for humanitarian assistance is also limited or blocked altogether.

Often, a temporary ceasefire is neccesary for international and local aid organisations to be allowed to enter. In January 2015 only two areas were allowed humanitarian assistance, one of them being Al-Waer in Homs.

In addition to restricted access, sieges are often combined with continuous air and ground assaults and those injured in the attacks do not have access to proper treatment or medical aid.

Civilians in these areas have little or no access to basic necessities, such as food, water [drinking or personal use], fuel or medication.

Water is manually pumped from wells and transported to homes in buckets, exposing it to a host of contaminants. Moreover, water sources are often polluted by sewage, the SAMS report said.

According to the report, in the besieged Eastern Ghouta and in several other neighbourhoods, civilians are forced to forage for tree leaves and wild plants; a number of victims are said to have died from ingesting toxic vegetation while foraging.

At least 560 victims have died in several besieged areas, most of them in Damascus and Homs.

Most of the victims were children and people who could not physically cope with the harmful impacts of malnutrition, dehydration, and extreme cold. 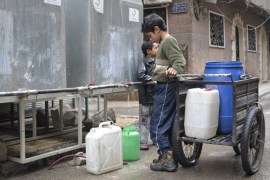 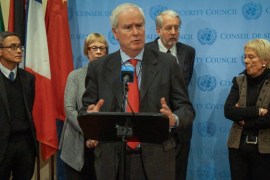