At 22:45 GMT on Friday, the sun will cross the celestial equator from south to north, marking the spring, or vernal, equinox.

The celestial equator is an imaginary line passing through the earth at the equator, and out into space. The centre of the sun crosses this line only twice a year, at the times we have called ‘equinox’.

This year, a solar eclipse occurred on the same day as the equinox. Part of the sun was covered by the moon for about two hours. A total eclipse has been seen on the Norwegian islands of Svalbard and in the Faroe Islands.

For some that will be of special significance, but even if not, annual celebrations happen in many countries to mark the equinox.

For most of the world’s population, this is the start of spring, but the weather does not seem spring-like everywhere.

There is still snow on the ground in the northeast of the US, after a record-breaking snowy winter. Snow is still falling in Scandinavia and Turkey, but these are exceptions.

Here are the expectations for the first day of spring:

The equinox occurs twice a year, once in March and once in September. It has happened since the earth was born.

Equinox literally means “equal night,” and really means that day and night are both 12 hours long.

From this point onwards, until the summer solstice in the northern hemisphere, days will get longer. More sunlight will shine and the growing season really begins.

In the southern hemisphere, this day marks the end of summer, and is consequently known as the autumnal equinox. South of the equator, days will get progressively shorter until the winter solstice. 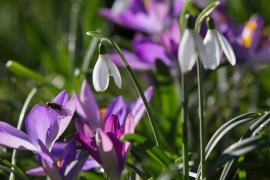 Spring has sprung in Oregon

The very weather pattern that is producing a record winter in the Northeast, is creating the opposite in the Northwest.