North Korea has test-fired two short-range ballistic missiles into the sea and warned of “merciless strikes” against its enemies in response to annual military exercises between South Korea and the United States.

The firing on Monday came hours before the US-South Korean military exercises were scheduled to begin, drills which the North denounces as a preparation for war.

The missiles hit the sea early on Monday morning after travelling about 490km, according to South Korea’s defence ministry.

Ministry spokesman Kim Min-seok said North Korea fired the missiles without designating any no-sail zones, which was regarded as a provocation.

“If North Korea takes provocative actions, our military will react firmly and strongly so North Korea will regret it in its bones,” Kim told a news briefing.

Pyongyang has escalated its rhetoric against the drills, with a spokesman for its army general staff saying Washington and Seoul “should be dealt with only by merciless strikes”.

Japan quickly lodged a protest with North Korea over the latest missile launches, saying they posed a serious threat to safety at sea and in the sky.

“We swiftly lodged a stern protest with North Korea.” 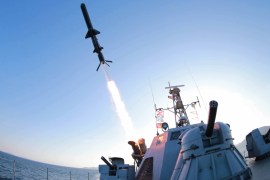 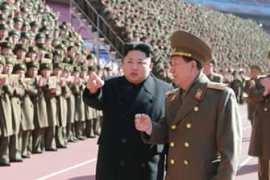