Amman – Three flights of unfinished cement stairs lead up to Mayadah Hammou’s flat in east Amman’s impoverished Jaba al-Nuzha neighbourhood. Fumes from a kerosene heater waft in the living room, where the family has gathered, huddling together for warmth.

At first glance, 34-year-old Mayadah, a mother of seven, does not look like someone who has lost so much in her life. She moves quickly around the house, welcoming guests with a big smile.

Two years ago, Mayadah, her husband Mohammad, and their seven children fled their home in the Syrian city of Homs, eventually arriving in Jordan.

“We feared for the lives of our children and our honour,” Mayadah told Al Jazeera.

Before arriving in Jordan, the family spent two years on the move inside Syria, searching for shelter from the constant shelling. They spent time in eight different villages around Homs, but “wherever we moved, they began shelling”, recalled Mayadah.

Mayadah was wounded in one of the air strikes, leaving a fragment of shrapnel in her back. Doctors told her that removing it may cause her to lose the ability to walk.

Despite the escalating violence, the family was determined to stay in Syria, hoping that President Bashar al-Assad’s regime would end and security would soon be restored.

“We thought it was a matter of days, weeks, or – maximum – months,” Mohammad said. But as the war dragged on, the violence only increased. Reports of militias using sexual violence and rape as a weapon finally prompted the family to leave for Jordan.

“I would rather watch my daughter or wife die before someone touches a strand of her hair,” Mohammad said, shaking his head.

In February 2013, the family, along with several others, were escorted through southern Syria to the Jordanian border by the Free Syrian Army, which has been helping Syrians enter Jordan since 2011.

At first, Jordanian authorities placed the family in the Zaatari refugee camp in northern Jordan, 80km north of Amman, where all nine shared a tent for a month.

That month was the worst time during their four years of displacement. “In Syria, we chanted ‘death rather than humiliation’, but when we arrived in Zaatari we realised that we escaped death only to be humiliated,” Mohammad said.

RELATED: No reprieve for Syrian refugees stranded in Greece

In the camp, refugees had access to food, shelter, schools and medical assistance. But the hot, dusty desert climate and poor hygienic conditions often caused tension and even riots in the camp. The Hammou children constantly suffered from diarrhoea and chest infections, and they found that medications did little to counter the effects of dust inhalation.

In search of better living conditions, they paid a bribe of 250 Jordanian dinars ($352) to be smuggled out of the camp, as tens of thousands of other Syrian refugees have also reportedly done. Since then, the family has moved four times within Amman and the nearby city of Zarqa, mainly due to disputes with landlords who raised rents significantly above the market rate. “They think the UN pays high salaries to Syrians,” Mohammad said.

In Syria, we chanted 'death rather than humiliation', but when we arrived in Zaatari we realised that we escaped death only to be humiliated.

Back in Homs, Mohammad owned a truck used for selling vegetables. They had a house of their own, consisting of four bedrooms and a large courtyard garden. Mayadah even bought new furniture just weeks before the uprising began. Last year, she received news that their house had been demolished in an air strike.

Now, the family of nine is living in a two-bedroom flat for 200 Jordanian dinars ($283) a month. Their living room is furnished with five foam mattresses. The floor is covered with several rugs and blankets donated by aid agencies and the Hammous’ Jordanian neighbours.

The kitchen has several cupboards, but they are mostly empty. For months, Mayadah’s family survived on 216 Jordanian dinars’ worth of food vouchers from the World Food Programme, to which all refugees living in host countries are entitled. But that amount was recently cut in half.

As a result, Mayadah has had to reduce the size of the children’s meals, and sells donated items like blankets and mattresses to pay for food and rent.

It is illegal for Syrians to work in Jordan, but about 60,000 Syrian children are believed to be working in Jordan, according to the country’s Ministry of Labour.

Mayadah’s mother and two brothers are now refugees in Lebanon. One of her brothers died while fighting with the Free Syrian Army, and another was arrested and has been missing for the past two years. She also has two brothers who are still living with their families in Homs: “They are stranded and praying for relief every day.”

The Hammou family finds refuge in visiting Mohammad’s brothers, who also fled to Jordan. They rarely interact with locals.

“We are always afraid of problems because we are Syrians,” Mohammad said. When they first moved to this house, neighbours rushed to donate blankets and cutlery to help them out. Their sole heater was given to them by a Jordanian woman.

But many other Jordanians, the family believes, resent them. Their 10-year-old son, Nayef, has been attacked by his classmates three times this year. “They call me Syrian and laugh at me for no reason,” Nayef said. His mother went to the school to complain, but she, too, was subjected to verbal assaults from pupils taunting her for being Syrian.

The family’s hopes for a quick return to Syria have dwindled. Nevertheless, they are determined to go back as soon as “Bashar falls down.”

Unlike Mohammad, Mayadah refuses to watch the news or see footage of the war in Syria. She wants to retain the beautiful image she has of the country she grew up in.

“No matter what got destroyed and lost,” Mayadah said, “Syria can blossom again once we gain our freedom”. 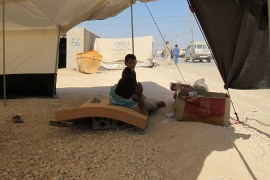 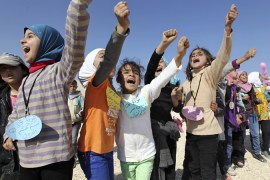 Thousands living in neighbouring countries exposed to dangerous exploitation and at risk of missing out on education. 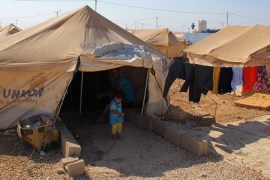 Amid inadequate housing and high debts, more than half a million refugees are increasingly vulnerable, report finds.