The death toll from the devastating Cyclone Pam that pummelled Vanuatu last weekend will not rise significantly, the prime minister of the South Pacific island nation has said.

Cyclone Pam roared across the island chain last Friday and Saturday, bringing winds of up to 300kph, torrential rain and massive storm surges, but the reported death toll was still a remarkably low 11 people almost a week later.

“It’s not going to rise dramatically,” the prime minister’s private secretary said of the toll.

Natuman’s comments came as relief groups struggled to get supplies to residents living in the country’s outer islands. Survivors are in critical shortage of food and water five days after the fierce storm.

With power, phones and Internet still down across much of the country, officials faced logistical headaches in sorting out where to send supplies, particularly in Tanna Island, which was hit hard.

Tanna’s roads remained blocked by debris, forcing aid workers to hike across the island to inspect damage to schools and other buildings, UNICEF said.

Though the death toll from the disaster stood at 11, officials and relief teams were growing increasingly concerned about islanders’ long-term survival, with food and water scarce in the worst-hit areas and access to some of the archipelago’s more remote islands remaining difficult.

More than 100 residents on Tanna, including the elderly and a newborn, have been sheltering in a store since Friday.

With no relief supplies yet to reach them, they have taken to eating fruit they find on the ground and drinking water from a creek to survive.

Planes have been carrying food, water and medical supplies to Tanna and neighbouring Erromango Island for two days, and a boat stocked with canned goods, biscuits and water was expected to head to the island on Thursday or Friday. But distributing it to the island’s villages remains difficult.

UNICEF estimates that nearly 5,000 people across Vanuatu have no access to drinking water. The problem is especially worrisome on Tanna, which suffers from water shortages in the best of times.

Tanna’s water towers were knocked over by the storm and wells built close to the shore were contaminated, said Sebastian Rhodes Stampa, disaster coordinator for the UN’s humanitarian affairs office.

Thousands of people remained homeless, with more than 3,300 sheltering in evacuation centers on Efate and in the provinces of Torba and Penama, according to the UN. 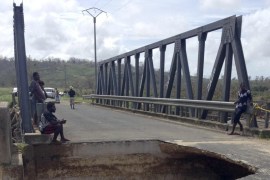 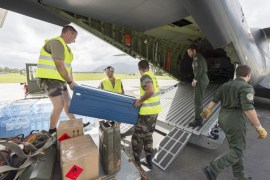 Relief supplies and teams begin arriving in the Pacific country following “monster” cyclone which has left many dead. 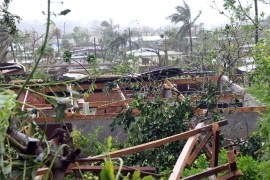