German demonstrators have clashed with police at an anti-austerity protests during the inauguration ceremony for the European Central Bank’s new headquarters in Frankfurt.

Police said two police cars were set on fire and one officer was injured by stones thrown by demonstrators near the city’s Alte Oper opera house during the protest on Wednesday, according to the Associate Press news agency.

Our correspondent also said that the city deployed at least 8,000 police officers ahead of the protest.

Video footage from the protests site showed some demonstrators running away from police in riot gear, as tires piled up in the middle of the street burn.

Police put up barricades and barbed wire around the bank headquarters as they braced for demonstrations against government austerity measures and capitalism.

Protesters targeted the ECB because of the bank’s role in supervising efforts to restrain spending and reduce debt in financially troubled countries such as Greece.

The Blockupy alliance said activists plan to try to blockade the new headquarters of the ECB ahead of a ceremony on Wednesday inaugurating the building, and to disrupt what they term capitalist business as usual.

Some 10,000 people were expected for a rally in Frankfurt’s main square, the Roemerberg.

Organisers have chartered a special train bringing demonstrators from Berlin and are busing in others from around Germany and other European countries.

Frankfurt police said most demonstrators are expected to be peaceful, but that violence-prone elements could use the crowds as cover.

The ECB, along with the European Commission and International Monetary Fund, is part of the so-called “troika” that monitors compliance with the conditions of bailout loans for Greece and other financially troubled countries in Europe.

Those conditions include spending cuts and reducing deficits, moves that are aimed at reducing debt but have also been blamed for high unemployment and slow growth.

Greece’s new left-wing government blames such policies for a “humanitarian crisis” leading to poverty for pensioners and the unemployed.

ECB President Mario Draghi has called for more spending by governments that are in good financial shape such as Germany – a call that has been mostly ignored by elected officials.

The ECB said it plans to be “fully operational” during the protest, although some employees may work from home. 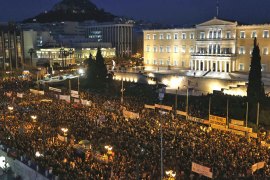 Demonstrators show their support for the government in front of parliament a day before crucial talks in Brussels. 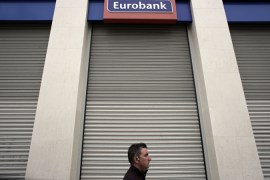 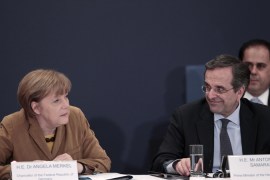