The attack on Maitiga airport on Thursday caused no major damage but delayed a Tripoli-based delegation from attending the Rabat-based talks.

Mohamed El Hejazi, a spokesman of forces allied to the UN-backed Tobruk-based government claimed responsibility for the attack.

“The strike is part of a war against terrorism that will continue until Libya has been freed of terrorism,” he said.

Al Jazeera’s Hashem Ahelbarra, reporting from Rabat, said the UN expected talks to resume on Friday with special envoy Bernardino Leon scheduled to meet a delegation from Tobruk then the Tripoli-based government.

Ahelbarra said the UN-brokered peace talks were aimed at addressing the country’s political crisis, with the UN keen on the creation of a national unity government.

Our correspondent said the UN is aiming for a ceasefire, with the disbanding of militias and the formation of a national army so the country can focus on the fight against groups linked to the Islamic State of Iraq and the Levant (ISIL).

Thursday’s attack came days after officials in Zintan, a western region allied to Abdullah al-Thinni, the Tobruk- based prime minister, accused the Tripoli-based government of launching air strikes against its local airport.

Both sides are aligned with rival armed factions that have been fighting over territory and oil facilities while militias have exploited the chaos to carve out fiefdoms.

The country has been gripped by chaos since longtime leader Muammar Gaddafi was overthrown and killed more than three years ago.

The country’s three main cities, Tripoli, Benghazi and Misrata, are largely controlled by militias aligned with Libya Dawn, and supportive of Omar al-Hassi, the head of the legally-installed government in Tripoli.

According to the UN, at least 400,000 people have been displaced by fighting across Libya, with as many as 83,000 people living in settlements, schools and abandoned buildings. 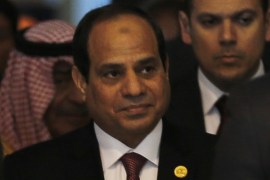 Network says authenticity of its report on children killed by Egyptian air raids in Derna verified by all witnesses. 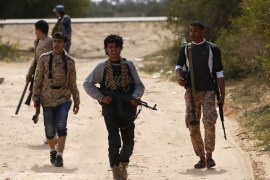