Syria’s military has shot down a US drone over the coastal province of Latakia, a stronghold of President Bashar al-Assad, state media has said.

The US military confirmed that it had lost communication with an unarmed Predator drone over northwest Syria on Tuesday and was looking into the claims it was brought down.

If confirmed, it would be the first time that Syrian forces have attacked a US aircraft since the coalition fighting the Islamic State of Iraq and the Levant (ISIL) began raids against the armed group in Syria in September.

Syrian state news agency SANA reported the apparent downing of a US drone in a breaking news alert.

“Syrian air defences brought down a hostile US surveillance aircraft over north Latakia,” it said, without providing further details.

While Syria is not participating in the air strikes against the ISIL, it has so far refrained from taking action against aircraft involved in the US-led coalition’s attacks on group.

Damascus has said it was given prior warning before the coalition began the strikes, and Foreign Minister Walid Muallem said last year that Washington had pledged its raids would not hit the Syrian army.

The strikes in Syria have largely been focused on Aleppo and Raqqa provinces, where the ISIL has strongholds.

But the campaign has also targeted the group elsewhere, and hit positions believed to belong to fighters affiliated with al-Nusra Front.

ISIL fighters have been largely absent from the northwestern province of Latakia, according to the Syrian Observatory for Human Rights, a Britain-based monitor.

But al-Nusra fighters are active in the province, which is home to the Assad family’s ancestral village and is a bastion of the Alawite sect of Shia Islam to which the president belongs.

According to the Observatory, the strikes have killed more than 1,600 people. 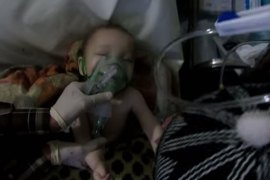 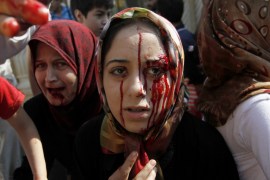