The president of Vanuatu has appealed for international assistance after his island nation was hit by a terrifying tropical cyclone in what may be one of the region’s worst weather disasters.

“I stand to appeal on behalf of the government and people of Vanuatu to the global community to give a lending hand in responding to these very current calamities that have struck us,” Baldwin Lonsdale said on Saturday during a speech at a UN conference in Sendai, Japan.

“Fellow heads of state, governments, and development partners, we have all experienced a form of disaster at one time or another. Today we appeal for your assistance.”

Lonsdale spoke as the full extent of the damage is unknown, with limited communications in Vanuatu after Super Cyclone Pam, a maximum category five storm, slammed directly into the island nation late Friday with gusts up to 320kph.

The UN had unconfirmed reports of 44 people killed in one province, and said late Saturday that there was no clear number of deaths or injuries but that the impact of the cyclone had been “catastrophic”, in a storm that France said highlighted the dangers of climate change.

The latest report on Saturday put the confirmed death toll of Cyclone Pam at eight.

It's like a bomb has gone off in the centre of the town.

“It felt like the world was going to end,” Alice Clements, a spokeswoman for the UN Children’s Fund (UNICEF), told Reuters news agency.

At least one person has been confirmed dead in Papua New Guinea, one of several other Pacific island nations also affected by the destructive storm, which hit the region starting on Friday.

UN Secretary General Bank Ki-moon said he had spoken to Lonsdale to extend his sympathies for the deaths and to express “strong commitment and solidarity” to the cyclone-hit nation.

The UN is preparing to deploy emergency rapid response units to Vanuatu on Sunday.

“We fear the worst,” Sune Gudnitz, the regional head of UNOCHA, said, speaking from Fiji.

Gudnitz said that with average wind speeds of up to 270 kilometres per hour, the Category 5 cyclone’s power was comparable to Typhoon Haiyan, which devastated the Philippines in 2013.

At present, he said, the only information available from Vanuatu has come from isolated reports on social media, describing a terrifying scene as Pam hit the capital, Port Vila, late on Friday.

“Vanuatu is a very vulnerable place because of its location in the middle of the ocean,” Gudnitz said. “It is possible that there will be a death toll that could be high. I can’t give any numbers. I think it is a well-grounded fear.”

The UN will attempt to deploy self-reliant rapid response units to Vanuatu, but weather could yet prevent them from landing, he said.

The International Red Cross told Al Jazeera that there was a shortage of shelter, water and food in the island nation after the storm. It added that the main hospital was damaged but the airport runway appeared undamaged. 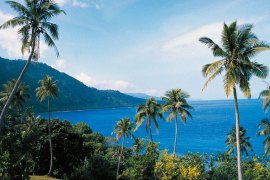 A major storm system is bringing vast amounts of rain and damaging winds to remote nation states in Melanesia.