The message was timeless, but not the packaging. Doing his best to imitate Kevin Spacey in House of Cards, Oren ultimately delivered a southern US accent that would make Colonel Sanders blush.

Israel has long been known for stern politicians and campaigns. But today, with just days to go before snap elections in March, videos like this have become mainstream political discourse in the country.

The trend began in December, when Naftali Bennett donned the hipster uniform – fake beard, plaid shirt, straight-billed baseball cap and wide-rimmed glasses – for a filmed skewering of the Israeli left. During the video, the head of the right-wing Jewish Home party is seen alternatively at a coffee shop, driving a Smart Car and walking his dog down Rothschild Boulevard, doling out apologies (as needless as his glasses) to anyone who crosses his path.

You ordered a babysitter? You got a Bibi-sitter.

Meanwhile, Israeli Prime Minister Benjamin Netanyahu’s ruling Likud party posted a video in January that depicts his foes – centrists Yair Lapid of Yesh Atid and Tzipi Livni of the Zionist Union, as well as right-wingers Avigdor Lieberman and Bennett – as unruly students at a kindergarten.

Netanyahu appears in the video as the voice of reason, which, in his view, is a kindergarten teacher who patronises toddlers. At the end of the video, a Netanyahu voice-over tells the Israeli public to vote Likud to “change the system” – perhaps failing to consider that Likud has been in charge of the system since 2009.

In a follow-up video, Netanyahu appears at the house of two young Israeli parents about to go out on the town. “You ordered a babysitter? You got a Bibi-sitter,” he says, referencing his nickname as he steps inside. The couple and the Bibi-sitter proceed to criticise Livni and the Zionist Union’s co-leader, Yitzhak Herzog, over anticipated capitulations to the Palestinians.

Bibi himself has not made it through the media wars unscathed. The Zionist Union capitalised on the fiasco that was Netanyahu at the Paris protests following the Charlie Hebdo attack.

Netanyahu pushing his way to the front of the group of world leaders present for a free speech demonstration, gained much attention in Israel, so the Zionist Union made a short 8-bit game called “Push the Bibi”, in which players direct Netanyahu towards to the front line of the demonstration, where a spot next to Palestinian Authority President Mahmoud Abbas awaits. Once Netanyahu arrives, text appears telling the player that “When Bibi wins, everyone loses.”

Meanwhile, Likud was responsible for a video showing members of the Islamic State of Iraq and the Levant (ISIL) driving through Israel.

At a stoplight, one asks an Israeli sitting in the next car over (in Hebrew, as Likud was seemingly unable to find anyone who could speak Arabic, although an estimated 18 percent of Israelis [Palestinian citizens of Israel] speak Arabic): “How do we get to Jerusalem?”

“Just turn left,” the Israeli responds. The video concludes with text saying the left would “capitulate to terror”. 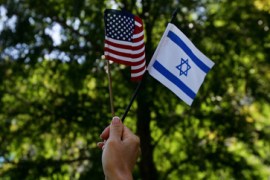 Election power of the Israel lobby

Analysts say pro-Israel groups will play major role in the US election race. 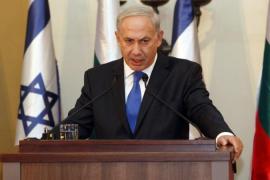 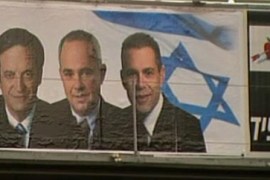 The issue of security is dominating run-up to Israel’s parliamentary elections.