A delegation of Houthis just returned from Iran and a spokesperson said Iran had pledged to expand Yemen’s ports, help build power plants and provide Yemen with enough oil to last a year.

Yemen is caught in a standoff between deposed president Abd-Rabbu Mansour Hadi and the Houthi rebels, who seized control of the capital Sanaa and staged a coup in February by dissolving the country’s parliament and creating a “presidential council”.

A spokesman for the exiled government, Rajeh Badi, said the Houthis would be the only ones to benefit from a deal with Iran.

“The Iranian interference is merely, inside or outside Yemen, about military support to some militias or military groups,” Badi said.

The National Alliance for Rescue comprises Sunni Muslim and secular parties, as well youth groups, tribal alliances and members of the Southern Movement, which seeks greater autonomy for the formerly independent south.

The United Nations warned this week that the situation in Yemen can spiral into something similar to Syria, Libya or Iraq if no solution is found through talks between the country’s rival parties.

The UN special envoy to Yemen, Jamal Benomar, told Al Jazeera on Thursday that there was a real danger of the country disintegrating and a civil war erupting.

“If there is no agreement, the prospects are very bleak. It’s a combination of scenarios like Syria, Libya and Iraq. It’s a horrible scenario and all sides are aware that every effort should be made for a peaceful way forward.” 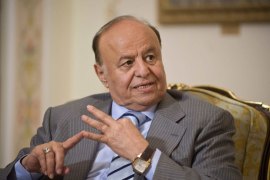