Saudi Arabia has recalled its ambassador to Sweden after a diplomatic row between the two countries.

In a statement, Saudi Arabia said the move was prompted by remarks by Swedish Foreign Minister Margot Wallstrom that amounted to “an interference in its internal affairs”, in violation of international covenants and diplomatic conventions.

The official Saudi statement carried by the state news agency SPA did not elaborate further.

He said the reason given for the action was Sweden’s criticism of Saudi Arabia’s record on human rights and democracy.

Wallstrom called Saudi Arabia a dictatorship last month and denounced its treatment of women. She also condemned Riyadh’s sentencing of the Saudi blogger Raif Badawi, punished with what she called a “medieval” 1,000 lashes.

Earlier this week Wallstrom said she was barred from giving a speech to the Arab League in Cairo after protests from Saudi delegates.

At the end of the League meeting, Arab foreign ministers expressed “condemnation and astonishment” at Wallstrom’s remarks, which were “incompatible with the fact that the constitution of the kingdom of Saudi Arabia is based on sharia,” according to a statement published by Gulf News.

The statement said: “Sharia has guaranteed human rights and preserved people’s lives, possessions, honour and dignity. The ministers consider the comments as irresponsible and unacceptable.”

The recalling of the ambassador came a day after Sweden announced it will not extend a long-standing defence cooperation agreement with Saudi Arabia.

Prime Minister Stefan Lofven and Wallstrom confirmed on Wednesday that the decision was taken because of Saudi Arabia’s lack of respect for human rights.

The defence cooperation agreement has been widely debated in Sweden in recent weeks, with powerful business tycoons speaking out in favour of a renewal. But pressure had been building from within the Social Democrat-led government with its coalition partner, the Green Party, calling for a cancellation.

Commenting on the decision to cancel the cooperation, Wallstrom said the deal had come to serve as a “symbol” of where the Swedish government stands in terms of “democratic development, equality and women’s rights” and that it had become “impossible” to keep it.

Sweden first signed a memorandum of understanding with Saudi Arabia in 2005, setting out details of cooperation on intelligence, surveillance and weapons manufacture, and paving the way for the sale of Saab’s Erieye radar system to the Saudis in 2010.

The agreement had to be ratified by each side every five years, and its renewal date was due in May. 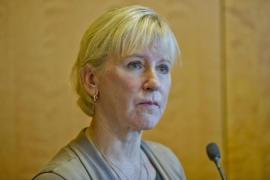 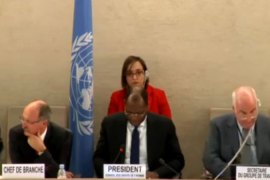 Saudi Arabia accepts majority of 225 recommendations but Amnesty International says its actions must match its words. 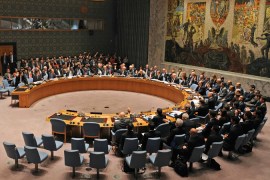