Tropical cyclone Pam has brought torrential rain and damaging winds to the islands of Melanesia.

As Pam continues its journey across the South Pacific, weather conditions could become much worse as it develops into a “supercyclone”.

Pam began to form on March 6, 750km to the east-northeast of the Solomon Islands – a remote island chain about 1,750km northeast of Australia’s northeastern city of Cairns.

The system developed as a twin disturbance before becoming a cyclone on Monday. Since then Pam has gained energy from the warm waters of the South Pacific. Sustained, destructive winds of more than 180kph are thought to have hit the Solomons. It is likely, however, that the rainfall has caused just as many problems.

A rainfall report of 495mm for the 24 hour period to the end of Tuesday, from the outlying Santa Cruz province seems hard to believe. Yet there is support for such an enormous deluge.

The Tropical Rainfall Measuring Mission (TRMM) is a joint venture between NASA and the Japan Aerospace Exploration Agency. It uses satellite data to analyse the cloud structures from major tropical storm systems.

The TRMM satellite showed that one of the intense rain bands that passed over the Solomon Islands dropped rain at an astonishing rate of more than 150mm per hour from cumulonimbus clouds reaching over 16km into the atmosphere.

As yet, there are no reports of damage or injuries coming out of these isolated islands, but that may well change in the coming days.

Pam has cleared the Solomons and now has Vanuatu in its sights. The Joint Typhoon Warning Center expects Pam to pass to the east of Vanuatu on Thursday.

By then, Pam is forecast to intensify into a category 5 ‘supercyclone’ with sustained winds of 270kph and gusts of 325kph. Such a storm would also rate as a category 5 on the Saffir-Simpson scale, used to measure Atlantic hurricane intensity.

Vanuatu will miss the very worst of the weather but will be close enough to experience damaging winds, flooding rain and dangerous sea conditions.

Thereafter, Pam will head southeast into an area of completely open water. It will have lost its cyclone status by the time it passes to the east of the north island of New Zealand early next week. 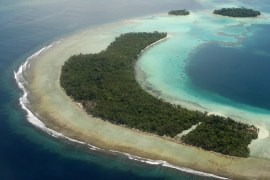 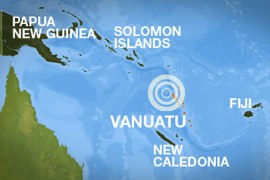 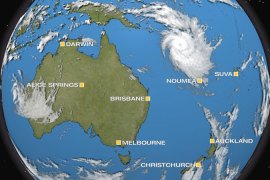 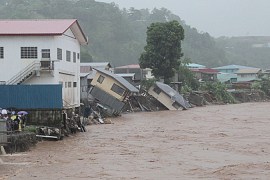 At least 16 killed and dozens missing as flash flooding leaves 10,500 homeless in capital of Pacific nation.