An international rights group says more than 600 medical workers have been killed in Syria’s nearly four-year conflict in deliberate and indiscriminate attacks, most of them by government forces.

Physicians for Human Rights said in a report released on Wednesday that it had documented 233 attacks on 183 medical facilities across Syria since the country’s uprising began in March 2011.

The group said that President Bashar al-Assad’s government was responsible for 88 percent of the recorded attacks on hospitals and 97 percent of the killings of medical workers.

The group’s director of investigations Erin Gallagher said “every doctor killed or hospital destroyed leaves hundreds or even thousands of Syrians with nowhere to turn for healthcare”.

Syrian activists have repeatedly accused the military of targeting medical facilities and staff in rebel-held areas in its bid to crush the country’s opposition movement. 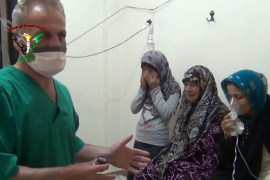 Security Council resolution approved by all members except Venezuela condemns use of chlorine as a weapon.