The Iraqi armed forces and the Popular Mobilisation Forces offensive to retake Tikrit from ISIL is as strategically significant as it is politically charged.

Strategically, Tikrit will prove to be a test of wills and a preview of future battles. How the fight goes and how it ends will have major ramifications on the rest or Iraq, most notably the fight for Mosul.

Taking over Tikrit will prove costly, especially to its resident who fought bravely and suffered gravely during the 2003 invasion of Iraq. Its association with the former leader, Saddam Hussein al-Tikriti, does not go unnoticed.

It remains to be seen what ISIL fighters are planning to do, or how far they’re prepared to fight for their mainstay. But it’s doubtful they’ll ever surrender.

The outcome also depends on the response of the local Sunni population that seems to be no less frightened of the Shia militias than they are of ISIL.

There are already reports of ransacked and burnt houses in the newly “liberated” Sunni towns near Tikrit. And some Iraqi leaders have warned against demolishing mosques and houses, or torturing and killing people in the areas newly liberated from ISIL.

All of which takes us to the politically charged situation that threatens to worsen against the backdrop of rising sectarianism in the country.

While Sunni leaders within Iraq and outside it blame Iran for instigating sectarianism in the region, the Iraqi government makes no apology for soliciting the help of “our friends” in Tehran to fight ISIL. Qassem Suleimani, the head of Iran’s Revolutionary Guards is already in Iraq to oversee the fight.

This of course further complicates the situation and threatens to undermine the campaign against ISIL.

This was echoed by General Martin Dempsey, the head of the Joint Chiefs of Staff of the US military. He warned that if the Baghdad government fails to bridge the sectarian divide, it will jeopardise the international coalition against ISIL.

To say the least. 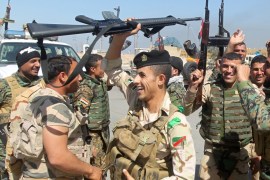