The closure of the Manama-based Alarab TV a day after its launch indicates the shrinking space for non-partisan media platforms in a region of turmoil, media analysts told Al Jazeera.

The channel, launched on February 1, hosted prominent Bahraini opposition activist Khalil al-Marzouq on its first hour on air. To balance its coverage, the channel also gave airtime to Bahrain’s Minister of Information, Isa al-Hammadi, to rebut claims made by Marzouq.

The channel, however, stopped broadcasting less than 24 hours after both interviews were placed on its website. No official explanation was given, other than “technical and administrative reasons”. Marzouq’s interview was also promptly taken offline, while Hammadi’s stayed up.

“The IAA emphasises that the Channel had also failed to match the standards of regional and international practise agreements, to take account of efforts aimed at stemming the tide of extremism and terrorism throughout the region and the wider world,” the statement read.

“[The suspension of Alarab] is just a new episode to remind us that during this critical period the region is going through, there seems to be no space for independent outlets in the mainstream media,” Zahera Harb, a journalism lecturer at City University, told Al Jazeera.

The history of pan-Arab media dates back to the 1970s, with the launch of the largely conservative, Saudi-owned Asharq Alawsat, based in London but with special editions for Morocco, Lebanon, and Saudi Arabia. Seeing the success of such media outlets from wealthy owners in the Gulf Cooperation Council (GCC), many others began venturing into the private sector.

Alarab TV is a great idea for a region that is beset by highly partisan media - the Muslim Brotherhood on one side and pro-government forces on the other. To offer a 'middle man' that could aim to explain both sides equally would benefit the Arab audience and perhaps reduce extreme polarisation.

In Tunisia, restrictions on media ownership were removed after the fall of former President Zine El Abidine Ben Ali. Owners of private television stations under his regime took advantage of the country’s new political environment, while Telvza TV sought to differentiate itself through a unique model: Launched in mid-December 2013 by a group of journalists, it is partially self-funded, with participants each owning no more than three percent of the venture.

Another pan-Arab TV channel, al-Araby al-Jadeed, was launched last month from London to coincide with the fourth anniversary of the January 25 uprising in Egypt. Initially, the channel’s CEO and director attempted to launch a channel from Egypt, but the idea was eventually shut down. It was then agreed to launch the channel in London.

A recent survey conducted by Northwestern University in Qatar on media use in the Middle East and North Africa, found that just 43 percent of respondents believed the media in their country could report the news independently, without interference from officials, while 48 percent believed that news media in their country were sufficiently credible.

Alarab TV, the brainchild of one of the Arab world’s richest men – which promised to “represent Arabs from Morocco to Saudi Arabia” – was silenced as soon as it spoke. Earlier last week, Saudi billionaire Al Waleed Bin Talal’s channel had vowed to break the mould of news reporting in the region.

“We are not going to take sides,” said the channel’s director, Jamal Khashoggi, a veteran liberal Saudi journalist. “We will provide accurate and objective information.”

Khashoggi said Alarab would not ban anyone, be it Abu Bakr al-Baghdadi, the self-proclaimed leader of Islamic State of Iraq and the Levant, the Muslim Brotherhood or even Bahrain’s opposition leader, Sheikh Ali Salman.

A day before the channel’s launch, Bahrain announced it had revoked the citizenship of 72 Bahrainis on charges that ranged from supporting terrorism to “defaming brotherly countries” and “inciting and advocating regime change through illegal means”. In an attempt to remain faithful to its mission statement, Alarab aired a segment on the decision and interviewed Marzouq, a former member of Bahrain’s parliament and a senior leader in al-Wefaq, the country’s largest opposition society. The transmission was later shut down.

According to the London-based website al-Araby al-Jadeed, Alarab was temporarily moving its operations to either Lebanon or London. The paper obtained a copy of a letter written by the channel’s CEO, Fahd al-Sukait, to Bahrain’s minister of information, which said Alarab refused to succumb to the conditions imposed on it by the ministry to resume broadcasting from Bahrain.

A public relations spokesperson for Alarab TV said the channel was unavailable to provide comment to Al Jazeera at this time.

“Alarab TV is a great idea for a region that is beset by highly partisan media – the Muslim Brotherhood on one side and pro-government forces on the other,” Matt Duffy, a researcher on Arab media and laws, told Al Jazeera. “To offer a ‘middle man’ that could aim to explain both sides equally would benefit the Arab audience and perhaps reduce extreme polarisation.

“However, Alarab TV will not be truly independent if they must worry about their content offending a government. Instead of being independent, Alarab will be forced to favour the government position because of the worry of being shut down again,” Duffy said.

In the letter Sukait sent to Bahrain’s IAA, Alarab said it had no choice but to look outside of Bahrain because of the media market it had to compete with.

Analysts say the incident shows the difficulty independent media networks face in finding space. “Independent media might be identified through alternative news websites, including blogs, that have proved vital for an alternative view away from the dominant politically charged mainstream media discourse,” Harb said.

Arab media analyst Sahar Khamis, a communications professor at the University of Maryland, told Al Jazeera that the surge and disappearance of many media outlets in the Arab world can be best understood in the context of the surrounding political environment.

“The question of who is in power dictates what kind of media are allowed to flourish, grow and gain prominence, and which are subjected to restrictions, limitations and harsh consequences,” Khamis said.

“The wave of political upheaval brought about varying degrees of push and pull tides between activists and the ruling regimes, which started to build their own learning curves and to master new communication techniques and advanced technologies to catch up with the political activists and citizen journalists.”

According to Duffy, no true media independence in the region can exist until related laws are changed to forge a freer press. “One of the impediments is the licensing of journalists and journalism outlets. When the government has the power to pull channels off the air, then the outlets will never be free,” Duffy said.

“In countries with a free press, the government does not license journalists or journalism outlets because such a power could be abused by government officials.” 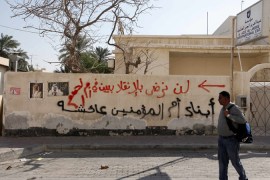 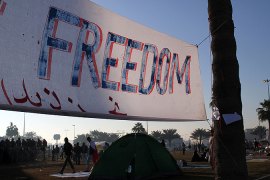 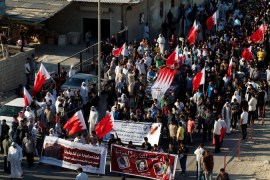 Bahrain opposition struggles with next steps