US President Barack Obama and German Chancellor Angela Merkel are trying for a public display of unity despite a potential split over arming Ukrainian fighters to better battle pro-Russia separatists.

That was the unstated point of Monday’s meeting at the White House, where Merkel was to brief Obama on upcoming talks aimed at reviving a peace plan for besieged Ukraine.

At issue is not only Russian President Vladimir Putin’s support to the separatists, but also the revival of the Soviet Cold War strategy of trying to create a critical division between the US and its NATO allies, Germany in particular.

Merkel and French President Francois Hollande met with Ukrainian leaders and Putin last week and have announced a new summit meeting for Wednesday in the Belarusian capital, Minsk.

French and German leaders are to sit down with Ukrainian President Petro Poroshenko and Putin in an attempt to breathe life into a much-violated September peace plan.

The US will not be at the table.

Merkel and Hollande are deeply opposed to arming Ukraine in its bid to push back the separatists that NATO and the US insist are being armed by Russia. The West also alleges that Russian troops are fighting in the eastern Ukraine.

The Kremlin said on Monday that President Putin would not tolerate any ultimatums over Ukraine after a report said Germany had given him until Wednesday to agree a peace plan or face new sanctions.

“We’ve already said everything about the tone of the negotiations,” Putin’s spokesman Dmitry Peskov said on Russian radio. “No-one has ever spoken or can speak to the president in an ultimatum-like tone much as one would like to.”

The White House has let it be known that Obama, who had resisted calls to send arms, was now considering doing just that.

Opponents of arming Ukraine believe that could open a proxy war between Washington and Moscow. Merkel and Hollande insist the only way to end the conflict is through diplomacy.

“It must be possible to find, not through military conflict but at the negotiating table, a balance of interests inside Ukraine that guarantees both the integrity of the state and the appropriate scale of autonomy” for the separatists, said German Defence Minister Ursula von der Leyen.

US Secretary of State John Kerry, on NBC’s “Meet the Press,” said that he, too, was working for a diplomatic solution but was ambiguous on arms for Ukraine.

“I have no doubt that additional assistance of economic kind and other kinds will be going to Ukraine. And we do so understand that there is no military solution,” he said in response to a direct question about sending arms.

“The solution is a political, diplomatic one. But President Putin’s got to make the decision to take an off ramp. And we have to make it clear to him that we are absolutely committed to the sovereignty and integrity of Ukraine no matter what.”

Meanwhile, the Ukrainian military has claimed that at least 1,500 Russian troops and convoys of military hardware had entered Ukraine over the weekend.

About 170 vehicles, including trucks, petrol tankers and cars, also crossed the border, he said. 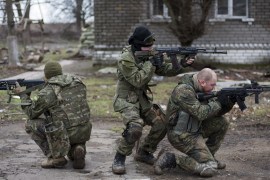 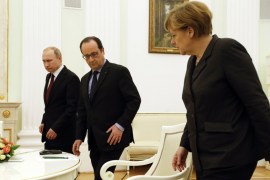 Russia and Germany vow to work on possible joint document on restoring Minsk deal to end fighting in eastern Ukraine. 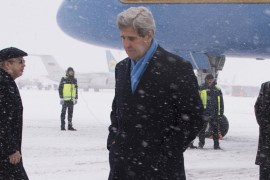 Kerry in Ukraine as US mulls arms supplies

US Secretary of State is in Kiev for talks as Washington considers sending weapons to fight rebels.