Firebomb attacks have killed at least nine people in Bangladesh, police said, amid growing international calls for an end to spiralling political violence in the country.

Three people died in a petrol-bomb attack on a truck in the southern district of Barisal early on Saturday while six people, including two children, died after opposition activists hurled petrol bombs at a packed bus to the capital Dhaka on Friday night.

The attack happened in the northern district of Gaibandha, Raziur Rahman, a police official cited by the Reuters news agency, said.

At least 30 people were injured, several critically, he added.

The latest deaths brought the overall toll in the month-long unrest to at least 76, mostly victims of fire-bombings of buses and trucks, reported the AFP news agency.

The violence began after the government confined opposition leader Khaleda Zia to her office when she threatened to lead a mass rally on January 5, the first anniversary of a disputed polls.

Zia then called a nationwide blockade of transport to topple the government of Prime Minister Sheikh Hasina and pave the way for new polls under a neutral government.

The protests have become increasingly violent and nearly 1,000 vehicles have been torched or vandalised.

The security forces have in turn arrested more than 10,000 opposition supporters while more than a dozen protesters have been shot dead, prompting allegations of a shoot-to-kill strategy.

After a plea from the US State Department for an end to the “unconscionable” firebombings, Human Rights Watch issued a plea for a halt to the “bloodletting”.

“All parties should cooperate to stop the cycle of violent crimes and ensure those responsible for all crimes are arrested and prosecuted,” said the New York-based watchdog’s Asia director Brad Adams.

“The violent crimes being committed by some members of the opposition cannot justify killings, injuries, and wrongful arrests by the government.”

Zia has vowed to continue protests but Hasina has ruled out any polls until the end of her tenure in early 2019. 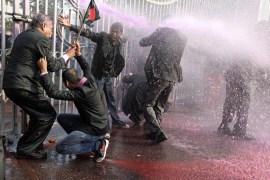 Supreme Court clears the way for prosecution of former leader Khaleda Zia on charges of embezzlement. 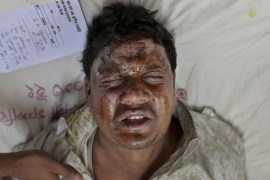 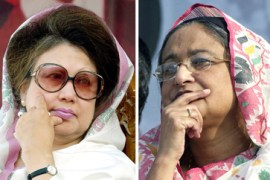