Egyptian military air strikes have killed at least 27 fighters in Northern Sinai region in one of the biggest security operations in the region in months, security sources say.

Apache helicopters on Friday targeted fighters belonging to Sinai Province, which has pledged allegiance to the Islamic State of Iraq and the Levant (ISIL) group, the sources said.

Sinai Province, fighting to topple the Egyptian government, has claimed responsibility for coordinated attacks that killed more than 30 members of the security forces in late January.

Sinai-based fighters have killed hundreds of soldiers and police since Sisi toppled President Mohamed Morsi of the Muslim Brotherhood group in mid-2013 after mass protests against his rule.

A security crackdown on Brotherhood supporters, in which hundreds were killed in the streets and thousands arrested, has weakened the group.

On Friday, Brotherhood supporters and security forces clashed in the Cairo suburb of Matariya, the state news agency reported.

Abot 18 people were killed in the Brotherhood strongold during the January 25 anniversary of the start of the 2011 uprising that toppled President Hosni Mubarak.

Egyptian authorities have also jailed liberal activists, including some that gained prominence in the 2011 popular uprising that toppled Mubarak, on charges of violating a law that effectively bans protests. 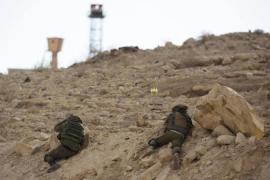 ‘Alienating Sinai no answer to terrorism’

As Egypt moves to demolish homes on the Gaza border, questions are raised on the effectiveness of the ‘war on terror’.