Each child, aged between 2 and 11, has red-raw, seeping flesh wounds where fire has scorched the skin away. Three of the children, large blistered welts across their faces, lips and ears, have burns covering at least 50 percent of their bodies.

On meeting three foreigners with cameras heading towards the Mother of Mercy hospital as he was driving away, a father who had just lost his child in the same attack turned his vehicle around and escorted the journalists back to the scene.

Journalists are banned by the Sudanese government from entering this region and the father wanted to show these rare visitors what had just happened to his family.

The area around their village of Um Serdiba has been bombed relentlessly for the last two weeks.

Nine children were sleeping in a foxhole inside their house when an artillery shell blasted through the roof at 4am on Tuesday morning.

One child, a girl of 16, died immediately. Then a fireball collapsed on to the foxhole, killing two others aged 10 and 8, and engulfing the rest in flames.

The children come from two families, their fathers are brothers.

They live in the Nuba Mountains, a rugged border region of Sudan’s South Kordofan state.

The government, ruling from the capital Khartoum, has been waging a brutal war in these hills for three years against a Nuba opposition group called Sudan People’s Liberation Army-North (SPLA-N), who control much of this territory.

As well as journalists, the Sudanese government forbids access for international relief organisations and restricts all humanitarian aid, leaving the entire region effectively under siege.

“It is continuous,” said Kununa Shanta, the father of the dead child, his face a picture of devastated shock.

“Daily shelling and bombardment. Shelling in the early morning and night and Antonov [war plane] bombing during the day,” said Shanta.

The Sudanese government has in the past denied that it targets civilians in Kordofan, saying that its military uses accurate methods to ensure that only rebels are hit. 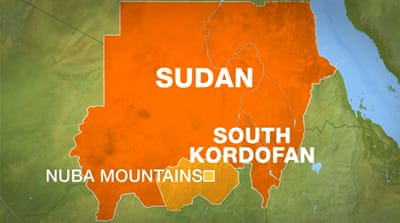 The few groups who are working to support and protect civilians in this forgotten war zone do so incognito and at great risk.

“I’m not sure that they’re all going to live,” said the head surgeon at Mother of Mercy hospital about the surviving children, under the condition of anonymity .

Hospital staff sedated the children, who are deeply traumatised, and cleaned their wounds.

“Burns are the worst cases. They’ll need skin grafts and it’s a lot of work to dress burn wounds. They will all be here for months,” said the surgeon.

The Mother of Mercy hospital, built in the fold of a red-rock valley, is the only fully functioning facility of its size in the Nuba Mountains.

There were three small medical facilities in the Nuba Mountains, including this hospital, which cater to a population of around one million scattered across these hills.

However, on January 20, one of these facilities, a field hospital run by medical charity Doctors without Borders (MSF) in a village called Frandala, was targeted from the air and bombed, causing the organisation to cease operations and withdraw from the region.

Ground fighting and aerial attacks have escalated in the Nuba Mountains since peace talks failed in
December.

Now, civilians are enduring some of the most intense bombardment since the start of the war in 2011.

At least 10,000 people have been displaced by violence in the last few weeks alone, according to local media group Nuba Reports.

The UNHCR is registering thousands streaming on foot over the border into South Sudanese refugee camps.

War wounds are a normality for staff at the hospital in South Kordofan, they have been treating them for three years, but the number of civilian casualties has gone up significantly since December.

“We are seeing an increase in non-combatants injured… We’ve treated 1,706 war-wounded since 2011,” said the surgeon.

“All the Antonov and artillery wounded in the past two weeks have been young, they are women and children. None of them are combatants.”

The government in Khartoum continues to deny allegations of atrocities committed against their own people in the Nuba Mountains while advocacy groups such as the Enough Project have published reports accusing Khartoum of “crimes against humanity by extermination”, driving and starving the Nuba off their land.

The hospital, which smuggles its vital medical supplies in by roads that are constantly monitored and targeted from the sky, continues to receive women and children bombed and shelled in their homes.

News came on Wednesday that one of the surviving children from Um Serdiba had died at the hospital overnight. Her young body could not withstand the trauma she had suffered.

“It is a campaign of terror,” said the surgeon.

“Their [SAF] ground forces are being defeated and if they can’t win militarily, what are they doing? They sit back and bomb and shell the villages. It is government-sponsored terrorism.”