Members of Tunisia’s sub-Saharan African migrant community have been living in fear after a recent spate of attacks following the country’s defeat in the African Cup of Nations.

In the hours following the 2-1 defeat, which saw Tunisia crash out against Equatorial Guinea last Saturday night, human rights groups warned the country’s black migrants to stay indoors after a number of sub-Saharan Africans were attacked by football fans.

Tunisian journalist Thameur Mekki witnessed one of the attacks in Borj Louzir, a suburb of Tunis, describing what he called “racist aggression” after the game. “A group of more than 10 Tunisian[s] severely beat a young black man,” Mekki wrote on Facebook. “Another was robbed after being assaulted by another group.”

Rania Romdhane, a spokesperson for migrant rights group M’nemty, also spoke of a culture of fear among the country’s sub-Saharan migrants.

“Sub-Saharan migrants here are living in fear right now,” she told Al Jazeera. “However, Tunisia has always been racist; this event just showed it more. You know, I can simply say some Tunisians have been raised to be racists and do not accept different cultures. It’s a mentality, a way of life.”

Sub-Saharan migrants here are living in fear right now. However, Tunisia has always been racist; this event just showed it more. You know, I can simply say some Tunisians have been raised to be racists and do not accept different cultures.

Indeed, the attacks following the football match highlighted a problem that is far more pervasive. Tunisia is currently home to several thousand migrants from sub-Saharan Africa, many of whom have come to Tunis in search of a better life: to study, play for one of the capital’s football clubs, or work at the African Development Bank. These residents have faced increasing difficulties in post-revolution Tunisia, Romdhane said.

“The violence on sub-Saharans, both verbal and physical, is definitely increasing,” she said. “Black migrants already face a difficult life here. They are facing a lot of violence and a lot of rejection, and I think after this game they will suffer more. The sub-Saharans attacked over the weekend are living proof of the struggle faced by many migrants.”

Statistics on the number of race-related attacks in Tunisia are unavailable following decades of denial by successive governments. According to Romdhane: “The Tunisian government and most of the political parties don’t consider Tunisia a racist country, so even in 2015, they are still unwilling to recognise the problem.”

A spokesperson for Tunisia’s Ministry of Social Affairs did not respond to Al Jazeera’s request for comment.

Some migrants say the abuse has become so severe, they are planning to leave the country. Ibrahim Sene, a 23-year-old finance student from Senegal, said he suffers daily harassment on the streets of Tunis.

“I am a victim of racism everyday,” he told Al Jazeera. “But it is not only me; it is the same for all African people here in Tunisia, even the diplomats and those working at the African Development Bank.”

Sene, who came to Tunisia with since-faded dreams of playing for one of the country’s professional football teams, says he is called a “monkey” up to five times a day. He was also attacked by a gang last year, he said.

“I had an argument with a student from Tunisia because he called me a monkey. After the argument, he went and got his friends; they came to my flat and smashed my door and broke the windows,” Sene said. “Once they got inside, they began to beat me. When they beat me I thought it was my last day on earth. The beating was so bad, I thought I was going to die.”

Sene said he called the police, but they were of little help. “When they came, all they did was ask me why I argued with the Tunisian in the first place.”

A police spokesperson did not respond to Al Jazeera’s request for comment.

His views are echoed by fellow Senegal native, Yakhya Sow, who earns a living as a chef catering to the sub-Saharan community. Sow says his life has gotten worse since the 2011 revolution that led to the fall of Zine El Abidine Ben Ali.

After a 2013 attack against a migrant in the Lafayette area, one eyewitness told France 24 that they heard the attackers shout: “‘Ben Ali is gone. This is Tunisia, not Africa!'”

Mali-born student Mamadou, who would not provide a last name, says he has also faced a tough time while attempting to settle in Tunisia. The 22-year-old has set up a part-time business in the capital, selling imported products to the sub-Saharan migrant community.

“The majority of people are good, but some people here treat us like animals, as though we are not human,” he told Al Jazeera. “My future here is not in my own hands. It is in the hands of the authorities.”

Tunisian officials have long stood accused of malpractice and corruption, and many within the African community have troubling stories about their dealings with police. In 2013, a video of a racially motivated attack against a sub-Saharan African migrant in Tunis sparked global outrage, as it showed police officers bundling the victim of the attack into a waiting police vehicle as his assailants walked free.

The question now is whether the country’s newly elected President Beji Caid Essebsi will increase efforts to stem racism in the country. “If I had one message for President Essebsi, it would be to make the country more inclusive for all people, regardless of their origin or skin colour – a Tunisia for everybody,” Sene said. 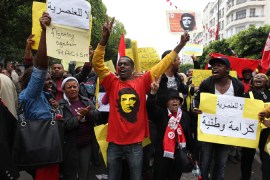 A number of black-rights advocacy organisations have emerged in recent years to tackle legacy of discrimination. 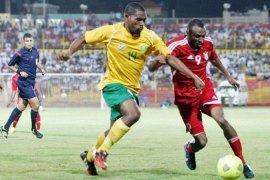 The African Cup of Nations begins its qualifying campaign despite deadly Ebola outbreak on the continent.