The United Arab Emirates, a key Arab member of the US-led coalition against the Islamic State of Iraq and the Levant (ISIL), has not flown combat missions over Syria since last December, US officials say.

The Gulf Arab state dropped out of the group of countries conducting air strikes against ISIL targets in Syria after a Jordanian pilot was captured, citing fears for their pilots’ safety in the case of downed planes.

“I can confirm that UAE suspended air strikes shortly after the Jordanian pilot’s plane went down,” AFP news agency quoted an unnamed US official as saying.

“But let me be clear that UAE continues to be an important and valuable partner that is contributing to the coalition.”

The US officials spoke on Wednesday only on condition of anonymity because the move has not been announced and they were not authorised to speak on the record.

The New York Times was the first to report the UAE’s decision to stop conducting air strikes less than a day after a video of Moaz al-Kassasbeh, the captured Jordanian pilot, being burned to death by ISIL surfaced.

Kassasbeh’s fighter jet was shot down in December, and efforts by Jordan to secure his release ultimately failed.

The UAE has demanded that the US improve its search-and-rescue efforts, including the use of V-22 Osprey tilt-rotor aircraft, in northern Iraq, closer to the battleground, instead of basing the missions in Kuwait, the New York Times cited officials as saying.

The country’s pilots will not rejoin the fight until the Ospreys, which take off and land like helicopters but fly like planes, are put in place in northern Iraq, the report said.

Even after the UAE stopped flying the missions, the US military has continued to state in daily news releases about the air campaign that the UAE is among coalition partner nations “conducting air strikes in Syria”.

Apart from the UAE, Bahrain, Jordan and Saudi Arabia take part in US-led air raids in Syria, which began in September.

Australia, Belgium, Canada, Denmark, France, the Netherlands and the United Kingdom participate in the air campaign in Iraq, which was launched on August 8.

The US plays a dominant role in the air war, carrying out at least 80 percent of the raids, according to officials. 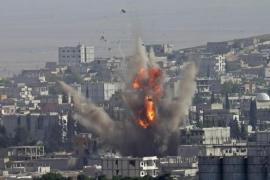 More than 1,700 bombs dropped in war on ISIL

Latest tally is released one month since the US-led coalition extended its air campaign from Iraq into Syria.