A shell has hit a hospital in the eastern Ukrainian rebel-controlled city of Donetsk, killing or injuring several people, the city administration has said.

“There was an artillery shell at 12pm (0900 GMT) … The shell hit a hospital, there are dead and wounded,” a statement on the administration’s website said on Wednesday.

It said the number of dead was being established but the Russian news agency RIA quoted rebel sources as saying that four people had been killed.

Earlier, the Ukrainian military said two of its soldiers had been killed and 18 wounded in fighting against pro-Russian separatists in the previous 24 hours.

The Ukrainian military said that separatist forces had launched around 80 artillery or rocket attacks on Ukrainian positions and villages in the past 24 hours.

The nine-month-old conflict in eastern Ukraine has killed more than 5,000 people. Violence has surged since the latest peace effort collapsed last Saturday in Minsk, Belarus, with no agreement. 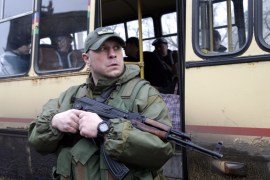 Debaltseve becomes flashpoint between army and pro-Russia separatists as they vie for control of strategic positions. 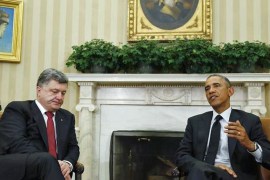 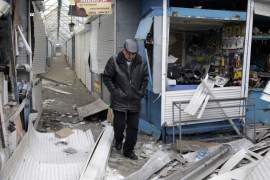 Intensified fighting in the country’s east displaces increasing number of civilians as it destroys homes.