Jordan has executed two death-row prisoners after vowing an “earth-shattering” response to avenge the burning alive of one of its fighter pilots by the Islamic State of Iraq and the Levant group.

A security source said the executions were carried out at Swaqa prison south of the capital Amman in the presence of an Islamic legal official.

Jordan had promised to begin executing the prisoners on death row at daybreak in response to the murder of Moaz al-Kassasbeh, who was captured by ISIL when his plane went down in Syria in December.

Rishawi, 44, was condemned to death for her participation in deadly attacks in Amman in 2005 and ISIL had offered to spare Kassasbeh’s life and free a Japanese hostage – who was later beheaded – if she were released.

“Usually, it is a long and highly bureaucratic process to carry out executions in Jordan. Several ministries and the king should approve them,” she said.

“However, a security source told Al Jazeera last week that Jordan would speed up the process if the pilot was harmed.”

Karboli was sentenced to death in 2007 on terrorism charges, including the killing of a Jordanian in Iraq.

Jordan had on Tuesday vowed to avenge the killing of Kassasbeh, hours after a harrowing video emerged online purporting to show the caged 26-year-old F-16 fighter pilot engulfed in flames.

The video – the most brutal yet in a series of gruesome recorded killings of hostages by ISIL – prompted global revulsion and vows of continued international efforts to combat the Sunni group.

Jordan’s King Abdullah II, who was visiting Washington as the video came to light, recorded a televised address to his shocked and outraged nation.

The king, once in the military himself, described Kassasbeh as a hero and vowed to take the battle to ISIL.

The army and government vowed to avenge the pilot’s murder, with Momani saying: “Jordan’s response will be earth-shattering.

president and King Abdullah reaffirmed that the vile murder of this brave Jordanian will only serve to steel the international community’s resolve to destroy ISIL.”]

“Whoever doubted the unity of the Jordanian people, we will prove them wrong,” he said.

US President Barack Obama, who hosted Abdullah in a hastily organised Oval Office meeting, led international condemnation of the murder, decrying the “cowardice and depravity” of ISIL.

“The president and King Abdullah reaffirmed that the vile murder of this brave Jordanian will only serve to steel the international community’s resolve to destroy ISIL,” a National Security Council spokesman said after the pair met.

The Obama administration had earlier reaffirmed its intention to give Jordan $3bn in security aid over the next three years.

Kassasbeh was captured in December when his jet crashed over northern Syria on a mission that was part of the coalition air campaign against the group.

Jordanian state television suggested he was killed on January 3, before ISIL offered to spare his life and free Japanese journalist Kenji Goto in return for Rishawi’s release.

The highly choreographed 22-minute video shows Kassasbeh at a table recounting coalition operations against ISIL, with flags from the various Western and Arab countries in the alliance projected in the background.

It then shows Kassasbeh dressed in an orange jumpsuit and surrounded by armed and masked IS fighters in camouflage.

It cuts to him standing inside a cage and apparently soaked in petrol before a masked man uses a torch to light a trail of flame that runs to the cage and burns him alive.

The video also offered rewards for the killing of other “crusader” pilots. 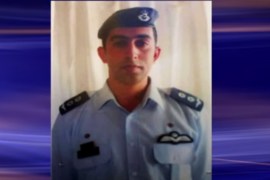 Jordan vows to save the life of ISIL-held pilot

Country pledges to ‘do everything it can’ to save Maaz al-Kassasbeh, after Japanese hostage is beheaded by armed group. 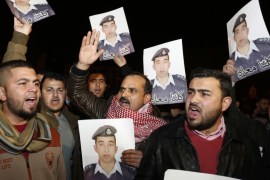 Government weighs release of Iraqi woman on death row in exchange for pilot as Japan worries about fate of its citizen. 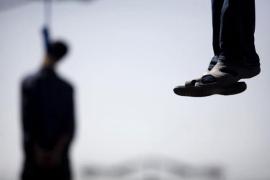