At least seven people have been burnt to death after suspected anti-government protesters set a bus full of passengers on fire in eastern Bangladesh, amid spiralling political unrest against Prime Minister Sheikh Hasina, police have said.

Several passengers were also critically injured in the attack on Tuesday in the town of Chauddagram, which was blamed on activists from the main opposition Bangladesh Nationalist Party (BNP) led by two-time former Prime Minister Khaleda Zia.

“Seven passengers were burnt to death in the bus after the petrol bomb was thrown at 4am,” district police chief Tuttul Chakrabarty told the AFP news agency.

“Five of the passengers are fighting for their life as 40-80 percent of their bodies were burnt. They have been shifted to a hospital in the capital,” he said.

“It’s an act of murder and we’re going to hunt down culprits.”

The deaths bring the toll in the month-long protests aimed at toppling Hasina to 54 – most of them victims of firebomb attacks on buses and lorries – as opposition activists try to enforce a transport blockade.

Authorities have stepped up the pressure on 69-year-old Zia, who has been holed up in her office since January 3, in a bid to halt the violence.

She called for the protests early last month, urging supporters to enforce a nationwide blockade of roads, railways and waterways to force Hasina to call a fresh election. The opposition does not recognise the January 2014 parliamentary elections which it boycotted.

Authorities on Monday ordered a probe into allegations of murder against Zia over the deadly protests, while a media magnate who is one of her closest aides was arrested.

Survivors of Tuesday’s attack said the bus was packed with local tourists returning overnight from the resort town of Cox’s Bazaar to the capital Dhaka.

“I woke up hearing loud cries and saw people burning in the bus. I jumped through the window and found a friend in flames. I doused the fire but his condition is critical,” one survivor told private Ekattur TV.

Up to 15 people were slightly injured after they jumped from the vehicle’s windows to try to escape the blaze, the police chief added.

In another attack on Tuesday, at least one person died and four people suffered burn injuries after a petrol bomb was thrown at a moving train outside Dhaka, police said.

Hundreds of people have been injured since the protests started, while local media say more than 850 vehicles have been gutted or damaged and inter-city transport services have ground to a halt.

Security forces have launched a nationwide crackdown – but the arrest of more than 10,000 opposition supporters appears to have done little to quell the unrest.

Zia denies her group is responsible for the violence and has demanded the release of detained opposition officials and leaders.

To press her demands, her party announced that a three-day strike that had been set to end on Tuesday would now be extended until Thursday.

Hasina has accused her rival Zia of trying to trigger anarchy. Authorities last week charged the opposition leader with abetting and instigating the firebombings.

Western countries including the EU, the impoverished nation’s biggest export destination, have urged Hasina’s government and the opposition to hold talks to resolve the crisis. 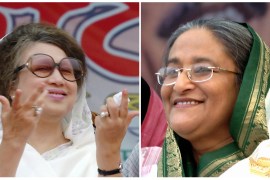 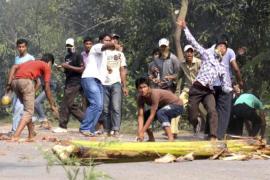 Former minister for Jatiya Party becomes 15th person to be convicted of atrocities in series of war-crimes trials.