Thousands of opposition supporters in Nepal have converged on the capital to protest controversial plans to vote on a disputed new national constitution.

Nepalese police on Saturday fired teargas and water cannon at the protesters in Kathmandu, as anger mounts over the planned vote.

Protesters threw bricks and stones in brief clashes with security forces who responded with about 20 rounds of teargas, police and an AFP news agency reporter said.

Reports said at least 24 civilians and four police officers were hurt in the clashes.

“We estimate that around 35,000 people are participating in today’s rally,” Kathmandu police spokesman Dinesh Acharya told AFP, while another officer said 4,000 police were lining the route through the city.

The alliance of 30 opposition parties is demanding the constitution draft be passed by a national consensus.

Years of squabbling have seen Nepal’s politicians miss a series of deadlines to draft the charter, which was designed to draw a line under a decade of civil war.

Kathmandu-based journalist Gyanu Adhikari, told Al Jazeera, that the protest was not over the draft charter, but how to produce it.

The government’s push last month to hold a vote, rather than seek agreement on disputed terms of the constitution, sparked protests including inside the parliament itself.

As thousands poured into an open meeting ground in the heart of Kathmandu, Maoist party chief Pushpa Kamal Dahal, known better as Prachanda, addressed cheering supporters and said, “today’s demonstration clearly shows how powerful we are”.

“Our strength should not be underestimated, otherwise the ruling parties should be prepared to face the upcoming challenge,” he said, warning of fresh protests unless lawmakers abandoned plans for a vote and returned to the negotiating table.

A key sticking point concerns internal borders, with the opposition pushing for provinces to be created along lines that could favour historically marginalised communities, handing them a majority and therefore more influence in those areas.

Other parties have attacked this model, calling it too divisive and a threat to national unity.

No date has been set for the vote on the charter, which was intended to conclude a peace process begun in 2006 when Maoist guerrillas entered politics, ending an insurgency that left an estimated 16,000 people dead.

The Maoists, who headed the first post-revolution government in 2008, failed to complete the constitution drafting due to political differences, resulting in fresh elections in 2013.

But six prime ministers and two elections later, political infighting has confounded efforts to hammer out a deal, throwing parliament into disarray and crippling the economy of the impoverished Himalayan nation. 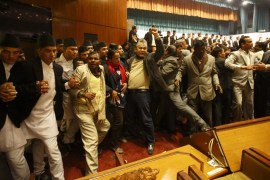 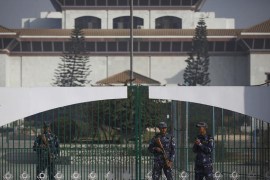 Opposition protests both inside parliament and on streets against government’s plans to push through a new constitution. 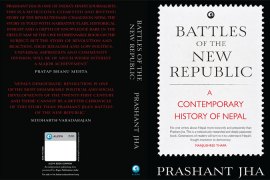 Nepal’s journey from war to peace

A new book looks at Himalayan nation’s decades of political change and difficult transition from monarchy to democracy.