Germany’s parliament has approved a four-month extension of Greece’s financial bailout, despite unease over the new government in Athens.

Greece was granted the extension by its European creditors on Friday in exchange for a commitment to budget reforms.

“This is not about new billions for Greece, not about changing this programme,” Finance Minister Wolfgang Schaeuble assured parliament ahead of the vote.

Lawmakers voted 542-32 to back the bailout extension. There were 13 abstentions.

Germany is among the countries that needed to approve the deal in its national parliament.

Al Jazeera’s Nick Spicer, reporting from Berlin, said the two main reasons viewed in Berlin behind this vote include identifying this vote as a last resort.

“There is really no choice if Greece really was forced to leave the eurozone the effects would be catastrophic for all of the countries using the single currency and especially Germany.

“The second reason, there is a feeling in Berlin that Angela Merkel largely got what she wanted when it came to discussions with newly elected Greek government and in particular it abandoned its plan to renegotiate and restructure its debt,” Spicer added.

Comments by Greek officials casting doubt on their promise to privatisation deals and raising the possibility of further debt relief had irked some in Germany in the run-up to the vote.

On Friday, Greece’s new radical left government said it had no intention of seeking yet another bailout deal from international creditors and would spend coming months trying to ease the terms of its current commitments.

“The bailout agreements are over, both in form and in essence,” Prime Minister Alexis Tsipras told a cabinet meeting. “Some people are betting on a third bailout in July … but we will disappoint them.”

Al Jazeera’s John Psaropoulos, reporting from Athens, said the ruling Syriza party is trying to to give the government a moral boost as it goes out to all those Euro group meetings.

“We have just seen the first anti-government protest since the election a month ago. Up until now all those protests you have seen outside the parliament have been organised by the radical left-wing Syriza,” Psaropoulos said.

“Now we are seeing the communist party emerging from Syriza’s left and trying to lure away votes, not only in parliament but also the support of ministers.

“One of them is already taking a stand at some distance from government positions saying he will not put the state companies in his portfolio up for privatisation as the austerity terms that the government has now agreed to,” Psaropoulos added. 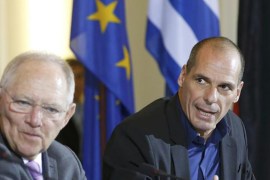 Berlin says the letter from the new Greek government “is not a substantial proposal for a solution.” 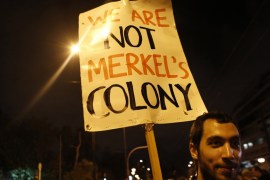 New Greek government running out of places to find support in Europe in its effort to abandon austerity.