Maldives authorities have arrested former president and current opposition leader Mohamed Nasheed, ordering him to stand trial for his 2012 decision to arrest a senior judge.

Nasheed resigned as president in February 2012 following weeks of public protests against his order to arrest Criminal Court Chief Judge Abdulla Mohamed. Mohamed was charged with corruption, but later released.

Last week the prosecutor-general withdrew the original criminal charges against Nasheed, but issued an arrest warrant on Sunday under new charges of terrorism relating to the same incident three years ago. The first hearing will be on Monday.

Police used pepper spray to disperse protesters from Nasheed’s Maldivian Democratic Party (MDP) as he was taken from his home.

“I call on the public to do all that is necessary to stop the harassment meted out to me and other politicians to save Maldives,” Nasheed told reporters in Male while being taken to a detention centre on a separate island.

The arrest came weeks after a key ally of Yameen Abdul Gayyoom, whose supporter helped him win the presidency, defected from the ruling coalition to align with Nasheed’s MDP to launch a series of protests to force Gayyoom to resign.

Government minister Mohamed Shareef said Nasheed was arrested because the court felt he may not honour a summons to stand trial.

Shareef said the anti-terrorism laws cover not only act or planned acts of violence, but a wide range of “acts agains the state”.

Nasheed is accused of using the military to arrest the senior judge when it had no authority to do so, Shareed said.

He is also accused of detaining Mohamed for weeks without trial or legal counsel and ignoring a Supreme Court order to release him, he said. 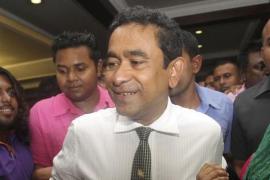 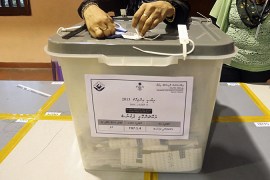 Polls have opened in a fourth attempt in recent months to hold run-off presidential elections and end political unrest.