Nigerian forces backed by air strikes have seized the northeastern border town of Baga from Boko Haram , the military says.

Retaking the town – at Nigeria’s border with Chad, Niger, and Cameroon – is particularly important as Baga was the headquarters of a multinational force of troops from all four countries.

Boko Haram, an armed group which wants to form an Islamic state, had claimed a January 3 attack that killed scores, possibly hundreds, and left its fighters in control.

“We have secured Baga. We are now in full control. There are only mopping up exercises left to do,” Major-General Chris Olukolade, an Nigerian defence spokesperson, told Reuters news agency by telephone on Saturday.

In a statement minutes earlier Olukolade had said that “a large number of terrorists had drowned in Lake Chad” as troops advanced on Baga.

Al Jazeera could not independently confirm the government’s report.

The fighters appear to be on the run in many parts of Nigeria and regions near its borders, after being subjected to a major offensive on all sides, reported Reuters, adding that although they have come close to being defeated in the past, they have bounced back deadlier than ever.

“Not even the strategy of mining over 1,500 spots with landmines on the routes leading to the town could save the terrorists from the aggressive move of advancing troops,” Olukolade had said in a statement earlier in the day.

“This is a significant moment, a symbolic victory,” she said. “But it is very difficult to know precisely how successful the operation was.”

Successes in pushing back Boko Haram are welcome news for Nigeria’s President Goodluck Jonathan as he faces an election on March 28 that was delayed by six weeks on the grounds that more time was needed to fight the campaign.

The poll, however, also provides a strong motive for the government and military to talk up successes.

The fighters have killed thousands of people and kidnapped hundreds in a six-year insurgency and have gained strength in the past year, carving out a territory the size of Belgium and intensifying cross-border raids.

To counter that threat, neighbouring states, where Boko Haram fighters habitually flee after hit-and-run attacks, are pursuing a strategy of pushing them back into Nigeria.

A spokesman for Chad’s army said his troops did not participate in the Baga offensive.

Niger and Cameroonian militaries were not immediately available for comment.

But in a sign of their ability to strike at neighbours, at least 23 people were killed in fighting overnight in an attack on the island of Karamga, on the Niger side of Lake Chad, held by Niger’s army.

Niger’s President Mahamadou Issoufou reiterated a pledge to defeat the group in a speech in the southern border town of Diffa, the scene of a wave of attacks this month.

“We are going to win this war because we are not alone,” he said on Saturday, outside an army barracks.

“We will come out from this test more experienced and battle-hardened.”

In a visit to Chad and Cameroon on Saturday, Laurent Fabius, French defence minister, expressed his solidarity and said international allies needed to give more financial support.

“We are working to get the force off the ground and contribute financially so that the burden is not heavy on the countries concerned,” he said, referring to an 8,700-strong force from the four countries plus Benin that military chiefs plan to agree on next week in Chad’s capital N’Djamena.

“We want a donor conference which could help with the financial charges,” he said.

France already provides intelligence and logistical support to regional armies but has stopped short of direct intervention, despite a strong military presence across the region. 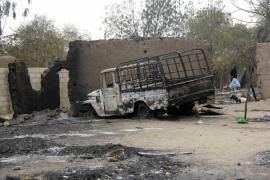 Reported number of people who died during an attack in Baga caught everyone’s attention, including our correspondent. 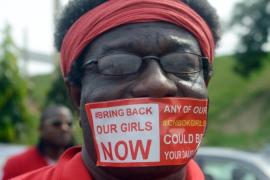 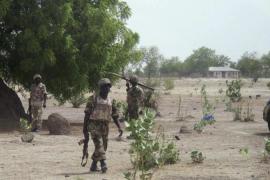 Nigerian army say operation in village resulted in death of 50 fighters who were planning an imminent attack.