At least two people have been killed after a blast struck a crowd at a pro-Ukrainian rally far from eastern Ukraine’s war zone, and Kiev said it had arrested suspects who had been armed and instructed in Russia.

Ukrainian authorities fear violence could spread from two rebellious provinces to other areas in the mainly Russian-speaking east, a swathe of territory which the Kremlin calls “New Russia”.

The bomb in Kharkiv, the biggest city in the east, struck one of numerous events across Ukraine on Sunday marking the deaths of 100 protesters a year ago in an uprising that toppled a Moscow-backed president.

“Today is memorial Sunday, but on this day terrorist scum revealed its predatory nature,” President Petro Poroshenko said on Facebook. “This is a brazen attempt to expand the territory of terrorism.”

Amateur footage posted on the Internet showed a few hundred marchers with Ukrainian flags shouting “glory to the heroes!” when the blast occurred. Demonstrators and bystanders, including a woman pushing a baby in a pram, fled in panic. A wounded man in military uniform lay in snow crying for help.

A Reuters journalist at the scene later filmed the bodies of two men lying by the road, draped in blue and yellow Ukrainian flags and surrounded by shrapnel.

Kharkiv is more than 200km from the war zone. It has occasionally seen violent protests by separatists in the past year but is now firmly under government control, and residents mostly support Kiev.

A Ukrainian prosecutor said one of those killed and four of the wounded were police who had been guarding the demonstration.

Igor Rossokha, a Ukrainian demonstrator, told Reuters his friend Igor was one of those killed: “We tried to give him first aid, but the paramedics arrived and said he’d died instantly because he was struck in the heart.

“We just wanted to commemorate the anniversary, and this happened right at the start of our march,” he said. “The whole thing was called off immediately out of fear there could be more bombs on the route.”

Markian Lubkivskyi, an aide to the head of Ukraine’s SBU security service, said four suspects had been arrested. They were allegedly planning to conduct a series of attacks in the city with a Russian-made “Shmel” rocket launcher.

“They are Ukrainian citizens, who underwent instruction and received weapons in the Russian Federation, in Belgorod,” he told Ukraine’s 112 Television. Belgorod is a city across the nearby Russian border from Kharkiv.

Moscow did not immediately respond to the accusations. It has long denied aiding its radical sympathisers in Ukraine.

Ukrainian officials initially said the blast was caused by an explosive thrown from a car, but later said a bomb had been buried under snow. The explosion follows blasts in other Ukrainian cities in recent weeks, although it appears to be the first with fatalities. 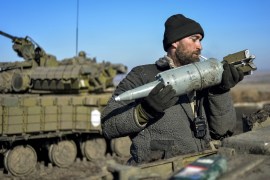 Both rebels and army say they will withdraw weapons from areas bitterly fought over as truce continues to be violated. 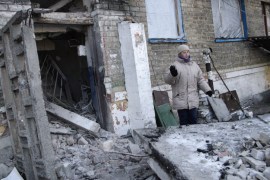 US threatens Russia with more sanctions over Ukraine

After talks with British foreign secretary, Kerry accuses Moscow of undermining ceasefire and warns of consequences.