John Kerry says the US and its European allies are in talks about harsher sanctions against Russia, while US President Barack Obama will evaluate next steps in dealing with the conflict in eastern Ukraine in the coming days.

The US secretary of state made the remarks on Saturday after meetings with his British counterpart Philip Hammond in London.

He said among options being considered by Obama was whether to arm Ukrainian forces and to impose deeper sanctions against Russia for alleged breaches of a February 12 European-brokered truce.

“In the next few days I anticipate that President Obama will evaluate the choices that are in front of him and will make his decision as to what the next step will be,” Kerry said.

“There are serious discussions taking place between us and our European allies as to what those next sanctions steps ought to be and when they ought to be implemented.”

Ukraine’s military accused Russia on Friday of sending more tanks and troops towards the rebel-held town of Novoazovsk, further east along the Sea of Azov coast from Mariupol, expanding their presence on what it fears could be the next battlefront.

The Russian government did not immediately respond to the allegation from Kiev, but has always denied accusations that its forces are fighting in Ukraine.

Kerry said the most “egregious violation” of the ceasefire was the assault on the city of Debaltseve and military supplies allegedly sent by Russia to separatists.

“We know to a certainty what Russia has been providing and no amount of propaganda is capable of hiding these actions,” Kerry said.

“For anyone wanting to make grey areas out of black, let’s get very real, the Minsk agreement is not open to interpretation, it is not vague, it is not optional.”

Dmitry Peskov, a spokesman for the Russian government, told Echo Moskvy radio station that Russia was focused on supporting the ceasefire deal, according to TASS news agency.

“An obsessive idea to force someone to pay the cost … is not conducive to the resolution of the situation in southeast Ukraine,” Peskov was quoted as saying, in response to Kerry’s remarks on the possibility of further sanctions against Russia.

Kerry said Russia and the rebels were only complying with the ceasefire accords in a few areas.

“If this failure continues, make no mistake, there will be further consequences, including consequences that will put added strains on Russia’s already troubled economy,” Kerry said.

Economic measures against Russia in the past year have severely damaged the country’s economy, without forcing Russian President Vladimir Putin to shift policy.

But the impact of new trade or financial sanctions would be blunted without the participation of European governments that have far deeper economic relationships with Russia.

Several have spoken in opposition to new action.

Even Britain, the closest European ally of the US, could have reservations given the billions of dollars’ worth of Russian investments in London’s financial centre.

Many European governments also oppose any US move to provide military support for Ukraine’s government, fearing that might prompt a wider proxy war.

Kerry hinted at no development on that front, saying such assistance was still under discussion among members of the Obama administration and the US Congress. 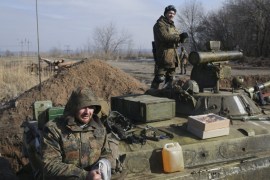 Clashes erupt across country’s east a day after rebels force thousands of troops to withdraw from strategic town. 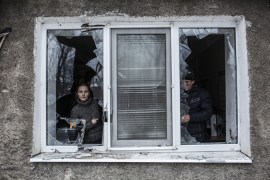 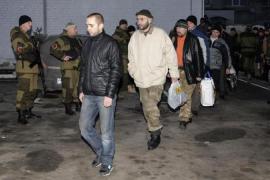 Ukraine receives back another four soldiers, completing exchange that involved 222 rebels and 150 troops.