The execution of two Australian drug smugglers on death row in Indonesia has been delayed by up to one month, the Vice President’s office said.

Husain Abdullah, the spokesman for Vice-President Jusuf Kalla, said on Friday the execution of Andrew Chan and Myuran Sukumaran, the ringleaders of the so-called Bali Nine heroin trafficking group, “will be delayed for between three weeks to a month from now due to technical reasons”.

Abdullah did not give further details.

Earlier, Indonesia’s Attorney-General Muhammad Prasetyo declared “nothing whatsoever” could stop the execution of the two Australians from going ahead, promising the drug smugglers will face the firing squad as soon as possible.

The impending execution has sparked a tense standoff between Indonesia and Australia, with Australian Prime Minister Tony Abbott being accused by Jakarta of making threats in his bid to save the pair.

Chan, 31, and Sukumaran, 33, were given a glimmer of hope this week when their scheduled transfer from Bali to the high-security prison where they are due to be shot was postponed.

But Prasetyo denied the executions had been delayed, insisting it will proceed “as soon as possible”.

“There’s basically nothing whatsoever that will hamper the implementation of this decision,” he told reporters on Friday.

Prasetyo said logistical difficulties involving capacity at Nusakambangan – the notorious island prison where five inmates were executed last month – had prevented the two Australians being transferred this week as planned.

Australia had also requested the men be granted more time with their families, he added.

Indonesia executed six drug offenders in January, including five foreigners, prompting a furious Brazil and the Netherlands – whose citizens were among those put to death – to recall their ambassadors.

Prisoners from France, Brazil, Ghana and Nigeria have also lost their bids for presidential clemency – the final avenue of appeal for a death row convict.

Diplomatic tensions escalated this week after Abbott said Indonesia should remember the significant financial aid Australia provided in the aftermath of the devastating 2004 tsunami that killed 170,000 Indonesians.

“We will not respond to an emotional statement, which was a threat in nature,” she said, adding she did not think Indonesia owed Australia anything for their tsunami aid. 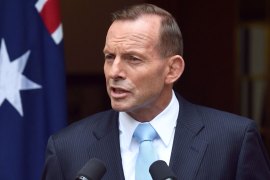 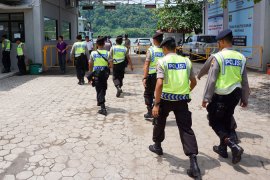