Pro-Russian separatists have vowed to mobilise up to 100,000 fighters for their latest eastern Ukraine offensive as the US mulled sending weapons to Kiev’s forces after the latest truce bid collapsed.

Alexander Zakharchenko, leader of the self-proclaimed Donetsk People’s Republic (DNR), was quoted by Russian news agencies as saying the mobilisation would take place next week.

“A general mobilisation is planned in the DNR in 10 days. Ten thousand men will be called up,” RIA news agency quoted Zakharchenko as saying in the city of Donetsk, though he did not make clear how the mobilisation would be enforced.

“The joint army of the DNR and the LNR will be 100,000 men strong,” Interfax news agency quoted him as saying, referring to the neighbouring self-proclaimed Luhansk People’s Republic.

“Mobilisation is the first stage; there will be volunteers first and we will see what to do next.”

Zakharchenko, who was elected in a vote in November that was not recognised by Kiev or the West, did not say how many separatists were currently fighting in east Ukraine.

Fighting in Ukraine’s industrial heartland has intensified in recent days, with Kiev officials and local authorities saying on Monday that five Ukrainian soldiers and three civilians had been killed in the last 24 hours.

Fighting claimed around 50 lives over the weekend, as the latest attempt at truce talks collapsed in acrimony in Minsk on Saturday.

The surge in fighting comes as Washington and NATO’s military commander appear to be moving towards supplying arms to Ukrainian forces, The New York Times reported on Sunday.

President Barack Obama’s administration was reviewing whether to provide “lethal assistance”, in addition to non-lethal aid such as body armour and medical equipment which it already supplies to Kiev, it said.

“A comprehensive approach is warranted, and we agree that defensive equipment and weapons should be part of that discussion,” a Pentagon official told the Times.

US Secretary of State John Kerry is set to travel to Kiev on Thursday to pledge Washington’s support during talks with President Petro Poroshenko and Prime Minister Arseniy Yatsenyuk.

Kiev, NATO and Western governments say they have evidence that Russia has sent troops and weapons to back the separatists but Moscow denies this. Ukrainian President Petro Poroshenko put the number of Russian troops in the east last month at 9,000.

French President Francois Hollande, German Chancellor Angela Merkel and Poroshenko, speaking by phone on Sunday, expressed their regret for “the failure of the talks” in the Belarussian capital Minsk.

The three leaders again called for “an immediate ceasefire”, according to the French presidency. 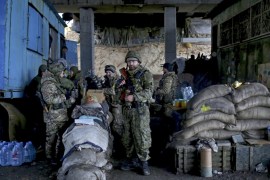 At least 19 soldiers and civilians killed in clashes across eastern Ukraine as peace talks in Minsk collapse. 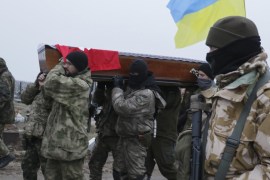 New round of Ukraine talks overshadowed by sanctions 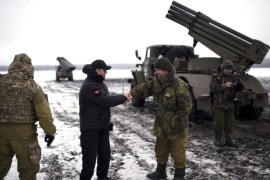