Tens of thousands of people have marched in the Argentinian capital demanding answers in the mysterious death of prosecutor Alberto Nisman who was ready to accuse the country’s president of a massive cover-up.

Protester Diego Sanz said that for once, Argentina wanted to find out the truth.

“There is too much political interference in the justice system,” he told Al Jazeera. “It is very suspicious that a prosecutor who precisely was investigating the president, ends up dead and no one knows what happened.”

The demonstration was the biggest one since Nisman was found dead in his bathroom with a bullet in his right temple on January 18. The AFP news agency reported that more than 400,000 people attended.

Nisman’s death came a day before he was to detail to Congress his accusations that President Christina Fernandez and top administration officials orchestrated a secret deal with Iran to shield Iranian officials allegedly responsible for the 1994 bombing that killed 85 people at a Jewish community centre in Buenos Aires.

Fernandez has denied the allegations, but her administration has struggled to confront a growing political crisis.

While organisers insisted that Wednesday’s march was not political, Al Jazeera’s Lucia Newman, reporting from Buenos Aires, pointed out that the presence of every major opposition leader and presidential hopeful indicated the contrary.

“Elections are just eight months away, and while Nisman’s death may not be clarified by then, if ever, the prosecutor has become a symbol and a martyr for the ruling party’s opponents,” she said.

In a televised speech just hours before the march began, Fernandez suggested that unnamed outside interests were somehow behind the scandal.

“I ask you to open wide your eyes,” she said. “I am not talking about conspiracies. It is a world of interests that want to subordinate others, and they are confronting governments like this one that let no one set limits for us.”

Her top aides suggested that the US and Israel were trying to drag Argentina into the Middle East conflict.

In 2006, with the support of former president Nestor Kirchner, the current president’s late husband, Nisman charged that the bombing was carried out by Lebanon’s Hezbollah movement with the involvement of top Iranian officials, including former President Akbar Hashemi Rafsanjani.

In 2013, Fernandez reached a deal with Iran that would have allowed Iranian suspects to be questioned at home, but that agreement never materialised.

Nisman and Argentina’s large Jewish community were vehemently opposed, arguing that Iran could not be trusted.

In his accusation against Fernandez, which was reaffirmed on Friday by his replacement, Gerardo Pollicita, Nisman said the Argentine leader was working behind the scenes to protect the Iranians in return for oil, at a time when the South American country was in the midst of an energy crisis.

He also alleged that Fernandez asked Interpol to lift outstanding “red notices” against the Iranians – a request that Interpol’s former director denied had been made. 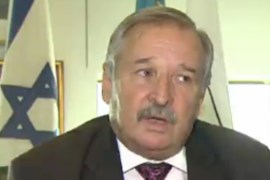 Death of prosecutor who accused government of covering up deadly 1994 attack fails to stop calls for investigation.