Debaltseve has been largely encircled for weeks by heavily armed rebels who previously had been exchanging continuous artillery fire with up to 8,000 government troops holed up inside.

Pro-Russian rebels said government troops had surrendered and they had taken control of the town, located between the separatist-held cities of Donetsk and Luhansk.

Ukraine’s defence ministry said that only part of the town had been taken.

“Street battles are continuing and the rebels are attacking the town in groups with support from artillery and heavy armour,” the ministry said in a statement. “Part of the town has been captured by the bandits.”

Al Jazeera’s Paul Brennan, reporting from near Debaltseve, said large plumes of smoke could be seen indicating that a large pipeline might have been hit.

Ilya Kiva, a Ukraine deputy regional police chief inside the town who was reached by telephone, said the rebels had entered Debaltseve and were using small arms, mortars and rocket-propelled grenades.

“There are wounded and killed but we cannot confirm the numbers yet as the battles are still continuing,” Kiva said.

Rebels quoted by Russian-language news agencies said their forces had entered Debaltseve from the east and the north and killed “many” Ukrainian soldiers in a “mopping up” operation.

The rebels also said they had taken control of the town’s railway station.

The hostilities and rebel checkpoints outside the town prevented journalists from entering to verify the
situation.

The fighting severely undermines an already shaky European-brokered ceasefire that came into effect across eastern Ukraine on Sunday.

A second step of that truce was meant to see the warring sides move their heavy weapons back from the frontline from Tuesday.

But Kiev and the rebels accused each other of repeated violations that prevented that happening.

Brennan said that until the fate of Debaltseve had been determined, the fate of the ceasefire remained uncertain. “Debaltseve is the key,” he said.

EU monitors, from the Organisation for Security and Co-operation in Europe (OSCE), have not been able to enter the town due to the fighting.

OSCE monitors, Ukraine and Russia held hours of talks over the fate of Debaltseve on Tuesday in Soledar, a town 40km from Debaltseve.

The rebels had earlier said that as they had Debaltseve entirely surrounded it should be considered inside their territory and not be covered by the frontline ceasefire.

However, Kiev argues its army was holding the town and maintained an access corridor, and so all hostilities there should have stopped as well.

In Geneva, UN official Rupert Colville said “we are particularly concerned” about thousands of civilians trapped in Debaltseve “struggling to get food, water and other basic necessities”.

The UN puts the total number of people killed since the start of Ukraine’s conflict in April last year at more
than 5,660.

The World Health Organisation says the war has also taken a toll on health infrastructure, with 78 medical
facilities shelled, six of them in the past two weeks.

On Monday, the EU ratcheted up its sanctions against Russia by blacklisting five Russians, including two deputy defence ministers, along with 14 Ukrainian rebel figures. Russia vowed it would retaliate. 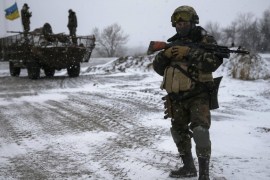 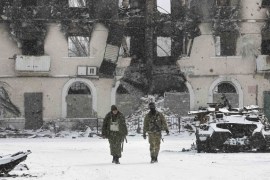 EU and US appeal for end to fighting after Kiev and rebels refuse to start withdrawing heavy weapons from buffer zone. 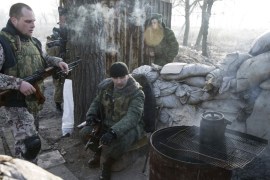 Only in the la la land of power politics can the fighting in Ukraine cease in a matter of days.