Yemen’s Houthi fighters have been accused of using violence and torture to silence their political rivals as the family of an activist abducted by the group said their son died from wounds suffered in captivity.

The family of Saleh al-Bashiri told Al Jazeera on Saturday that the Houthis were responsible for their son’s death after pictures posted on social media purportedly showed their son’s bruised and swollen body.

Bashiri was abducted along with three others last week after participating in an anti-Houthi protest in the capital Sanaa.

Fouad al-Hamdani, an activist who was also released by the Houthis told Al Jazeera that he was beaten and forced to make confessions against his will.

“They kept beating me, torturing me for hours. They wanted false confessions, things that I was never involved in.

On Saturday, the Shia group that took control of the government in a coup on February 6 fired live rounds to disperse thousands of protesters in central Yemen, as security fears prompted more foreign governments to close their embassies in Sanaa.

The Houthis have been accused of attacking and detaining protesters as well as reporters covering demonstrations against their seizure of power.

Demonstrations erupted in Sanaa as well as in Ibb, Aden, Taiz and Dhamar. In Ibb, four people were injured when Houthi gunmen fired on protesters, medics said.

The Houthis have banned all demonstrations unless they are authorised by the interior ministry, which itself is now under the group’s control.

The group dissolved parliament and appointed Mohammed Ali al-Houthi, a cousin of the group’s leader Abdel-Malik al-Houthi, as the new president.

The group has defended its coup, calling it a “glorious revolution” that has “broken the shackles of injustice and corruption”.

RELATED: Yemen: ‘It is still a revolution’

Since the coup, fears over instability have grown, with the US, France, Britain, Germany, Italy and Saudi Arabia closing their embassies.

On Saturday, Spain, Turkey and the UAE said they would close their missions citing security concerns.

But the draft falls short of what the Arab countries of the Gulf Cooperation Council (GCC) would like.

Alleging that Iran is backing the rebels, the GCC states have demanded a resolution that condemns the Houthis and acts under Chapter 7 of the UN Charter, meaning it can be militarily enforced.

The draft emerged just two days after Ban Ki-moon, the UN chief, told the council that Yemen was “collapsing before our eyes”.

On the ground, heavy clashes were reported on Saturday as Houthi fighters fought Sunni tribesmen in the southern mountainous province of al-Bayda. 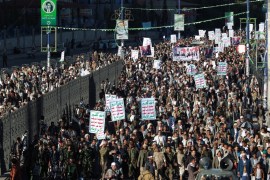 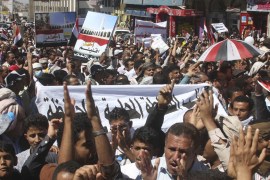 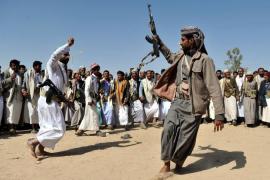