Anti-Houthi officials have called on Yemen’s Gulf neighbours to intervene in the country’s political crisis as the UN warned it was preparing to adopt a resolution calling on the group to step aside.

Politicians from the recently dissolved parliament met in Aden on Sunday and agreed on a 16-point statement addressing the Houthi takeover.

Al Jazeera’s Jamal Elshayyal, reporting from Aden, said the attendees agreed to transfer power from the capital to the southern coastal city, calling the situation in Sanaa an “occupation”.

“The 16-point statement also called for the formation of a ‘collective mechanism’ that would look after the administrative, political and security affairs of areas not under Houthi control.

“Among them are the strategic towns where oil production takes place,” our correspondent said.

Sunday’s meeting was held to unify efforts against the Houthis and the coup carried out by them.

The Houthis, whose traditional power base is in the country’s north, dissolved parliament on February 6 and installed Mohammed Ali al-Houthi, a cousin of the group’s leader Abdel-Malik al-Houthi, as the new president.

Meanwhile, the UN Security Council said it was due to adopt a resolution later on Sunday urging the Houthis to step down, release government officials and negotiate, diplomats said.

A draft resolution obtained by Al Jazeera called for the Houthis to “immediately and unconditionally” withdraw forces from government institutions, release President Abd-Rabbu Mansour Hadi and his cabinet from house arrest, and engage “in good faith” in UN-led peace talks.

Alarmed and worried that Shia powerhouse Iran is backing the rebels, the Gulf Cooperation Council (GCC) called for UN to evoke Chapter Seven, which allows for economic and military pressure to enforce council decisions.

Houthi spokesman, Mohammed Abdulsalam, insisted the group would not “cede power in the face of threats”.

The draft emerged just two days after UN Secretary-General Ban Ki-moon told the council that Yemen was “collapsing before our eyes”. 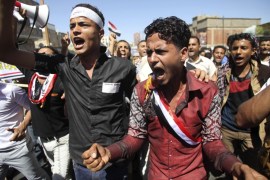 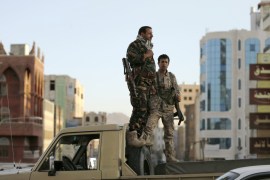 Kingdom is the first Arab country to evacuate embassy staff from Sanaa after Houthis took over government in a coup.