Nigeria’s president has called for greater military assistance from the US in the fight against armed group Boko Haram.

President Goodluck Jonathan appealed to the US to “come to Nigeria” in an interview published with the Wall Street Journal, citing US-led operations against the Islamic State of Iraq and the Levant (ISIL) as the pretext for intervention.

“Are they not fighting ISIL? Why can’t they come to Nigeria?” Jonathan said. “They are our friends. If Nigeria has a problem, then I expect the US to come and assist us.”

He told the US newspaper that Nigeria had made a request for combat soldiers and military advisers in early 2014, but speaking in Washington, Pentagon spokesman Rear Admiral John Kirby said there were no plans to send US troops to Nigeria.

“I can tell you that there are no plans as I speak here to send unilaterally, to send or to add US troops into Nigeria. There are no US troops operating in Nigeria,” Kirby told reporters.

Nigerian government sources told Al Jazeera that the attack had been repelled by the military.

There was no immediate reports on casualties.

Jonathan and his government have long sought to portray the conflict as being fuelled by outside forces, however his critics have interpreted his attempt to blame foreigners as a diversion from national failings.

Boko Haram leader Abubakar Shekau has previously mentioned ISIL leader Abu Bakr al-Baghdadi in videos, but has not pledged allegiance to the outfit.

Formed in 2002, Boko Haram is against any reading or writing that is not connected to Islam, and is fighting against authorities to establish an Islamic emirate. 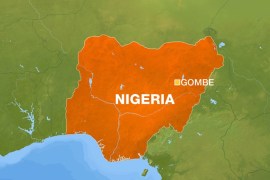 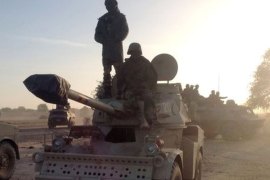 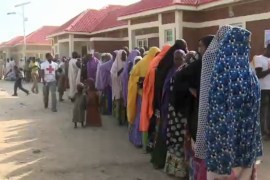 More than a million people fled to Maiduguri after their towns were attacked, but they carried the trauma with them. 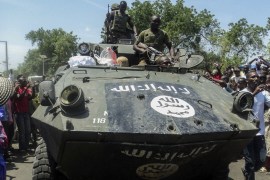