Arvind Kejriwal has promised to make Delhi India’s first corruption-free state and end what he called its “VIP culture” as he was sworn in as chief minister of the capital city in front of a huge crowd of supporters.

“Today we are confident that in five years we will remove corruption from Delhi. We will make Delhi India’s first corruption free state,” the leader of anti-corruption party, Aam Aadmi Party (AAP), said.

Today we are confident that in five years we will remove corruption from Delhi. We will make Delhi India's first corruption free state

Kejriwal, who took office on Saturday, promised to fight divisive politics in a challenge to the federal government of Narendra Modi that has faced criticism for attacks on churches and other minorities.

“For the last few months, some incidents have happened in Delhi and people are unhappy. Attempts were made to create rift between religious groups…. People of Delhi are very peace loving and we will not tolerate it,” he said.

The newly elected chief minister also pledged to lay out his five-year term and said he would not succumb to arrogance after his upstart AAP won one of the biggest election victories the Indian capital has ever seen.

The 46-year-old former civil servant’s first term as chief minister lasted just 49 days and ended in chaos when he quit exactly a year ago.

Despite that, his party took all but three of the 70 state assembly seats in elections last Saturday, a remarkable turnaround for the politician most pundits had written off after a poor performance in the general election.

In his inauguration speech, Kejriwal admitted he had been over-ambitious, and promised to focus on running the capital.

“I have decided that for the next five years we will only focus on Delhi. I will serve Delhi with all my heart,” he told the gathered crowd at the open-air ceremony.

Corruption is a huge problem in Delhi, where many citizens complain that they need to pay bribes even for something as basic as getting a driver’s licence, and the city saw the emergence of a huge anti-corruption movement in 2011.

Kejriwal also said his government would eschew the trappings of power, including the red beacons that allow senior politicians to glide through traffic in the gridlocked city.

“In developed countries, even PMs wait at bus stands. Why can’t the same happen here?” he said.

Kejriwal also said people of all faiths should live in harmony in the Indian capital, which has suffered a recent spate of attacks on churches, promising “strong action” against acts of religious hatred.

Some analysts have attributed the Hindu nationalist BJP’s poor performance in the Delhi polls to a failure to address religious extremism in India. 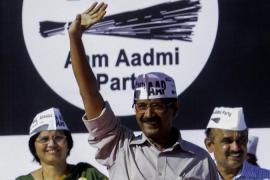 Questions being asked about future of AAP party as internal bickering comes to fore after party’s election loss. 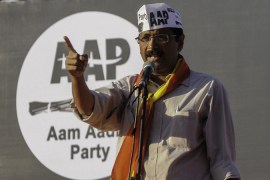