Brazilians are hoarding water in their apartments, collecting rain water and taking other emergency measures to prepare for forced rationing that appears likely because of a drought.

In Sao Paulo, the country’s largest city with a metropolitan area of 20 million people, the main reservoir is at just six percent of capacity with the peak of the rainy season now past.

Uncertainty over the drought and its consequences on jobs, public health and overall quality of life have further darkened Brazilians’ mood at a time when the economy is struggling and President Dilma Rousseff’s popularity is at an all-time low.

After January rains disappointed, and incentives to cut consumption fell short, Sao Paulo officials warned their next step could be to shut off customers’ water supply for as many as five days a week – a measure that would likely last until the next rainy season starts in October, if not longer.

State officials say they have not yet decided whether or when to implement such rationing, in part because they are still hoping for heavy rains in February and March.

But many residents are not taking their chances and stores selling large water storage containers are struggling to keep up with demand.

Rosangele Olvieira, who manages a container store in Sao Paulo, said residents bought up her supply of water containers faster than she could replace them.

“We are having trouble finding the containers even at the factory. We went almost a month with customers looking for containers and we did not have anything for the customers,” Olvieira said.

Even large apartment complexes are finding ways to save water or use rain water when possible.

Large hospitals in Sao Paulo are installing in-house water treatment and recycling centres, among other measures, to make sure they can still carry out surgeries and other essential tasks if regular supply stops.

At the Sirio Libanes Hospital Antonio Carlos, a hospital engineer, has created a system that recycles water from sinks and showers so it can be reused again in the air-conditioning units or to flush toilets.

He says so far the hospital has escaped any major shortages, but that he is still working to save more water.

“We’ve survived this perfectly well. Up until now we haven’t had any problems. It is obviously a concern and one of our worries is to optimize the reuse of and increase even more the reuse of water in the system,” he said. 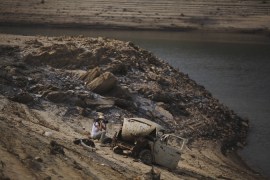 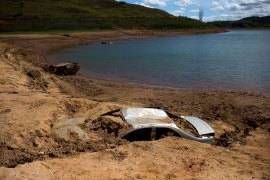