Tens of thousands of people have rallied across Yemen to mark the anniversary of the country’s 2011 uprising and to protest against the Houthis takeover of power.

Protesters staged a huge demonstration in the central city of Taiz on Wednesday in the largest protest yet against the Houthi coup.

Hundreds more rallied in the capital Sanaa, as protesters denounced the group and Ali Abdullah Saleh, the former president who was forced to step down in early 2012 after a months-long uprising.

The Houthis, who control 10 of Yemen’s 22 provinces, are believed to be bolstered by army units who maintain loyalty to Saleh.

Saleh and his former ruling party, the General People’s Congress (GPC), have denied claims they are seeking to reassert control over the country through the Houthis.

However, in a leaked telephone recording received by Al Jazeera last month, Saleh is apparently heard coordinating military and political moves with Abdul Wahid Abu Ras, a leading Houthi military leader, a month after the group seized control of Sanaa.

The Houthis, whose traditional power base is in the country’s north, have defended their takeover, calling it a “glorious revolution” that has “broken the shackles of injustice and corruption”.

The group dissolved parliament on Friday and installed Mohammed Ali al-Houthi, a cousin of the group’s leader Abdel-Malik al-Houthi, as the new president.

Since the coup, fears over instability have grown, with the US, Britain and France announcing plans to close their embassies.

On Wednesday, France and Britain said they would close their missions in Sanaa, while employees of the German embassy said its mission was destroying sensitive documents and would soon close.

“The security situation in Yemen has continued to deteriorate over recent days,” UK’s minister for the Middle East, Tobias Ellwood, said in a statement.

“We now judge that our embassy staff and premises are at increased risk,” Ellwood added.

The US closed its embassy and evacuated its staff on Tuesday citing the political crisis and security concerns as the reason for the closure.

Houthi, who leads the Shia fighters, denounced foreign governments for removing their diplomats, warning his enemies not to stand in his group’s way.

“We will not accept pressures. They are of no use,” Houthi said in a speech broadcast on the group’s Al Masirah TV channel.

To defuse the crisis, the UN has been trying to broker a power-sharing deal between the Houthis and its rival political forces but with little headway.

Jamal Benomar, the UN envoy to Yemen, told Al Jazeera the current situation was a result of numerous factors and warned the country was on the brink of civil war.

“The collapse of the state and the breadth of violence by militias and armed groups; in addition to the situation in the south are all negative signs and indications,” he said.

Talks aimed at ending the crisis have been ongoing since Monday, with Benomar due to brief the Security Council session later on Wednesday. 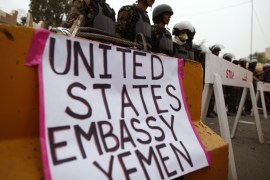 US closes Yemen embassy and orders ambassador to leave

White House says its ambassador in Sanaa will leave the country by Wednesday as it orders the closure of its embassy. 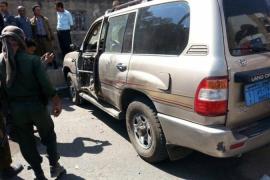 Sunni party’s assistant secretary-general died instantly when an explosive device attached to his car went off. 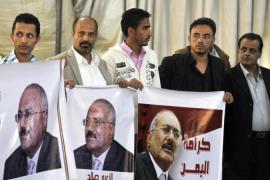