According to initial results, released on Tuesday morning, the opposition Aam Aadmi Party (AAP), led by former chief minister Kejriwal, was further ahead than straw polls earlier in the week had predicted, and leading in 62 seats out of 70.

Modi’s ruling Bharatiya Janata Party (BJP) would hold just seven seats if the current trend continued. The counting had not finished on Tuesday morning and final results were subject to change.

“Such a big mandate is very scary, and we should live up to people’s expectations,” Kejriwal told his cheering supporters, who showered rose petals on him outside the party’s headquarters in New Delhi.

He said the arrogance of leaders in Modi’s BJP led to the party’s poor showing. The BJP has been on a winning streak since demolishing the competition in national elections in May, with many attributing its success to Modi’s charisma, his promises of economic growth and voters’ fury over endemic corruption.

Al Jazeera’s Faiz Jamil, reporting from New Delhi said the extent of the lead had not been expected.

“The AAP has about 85 percent of the vote – that is more than an absolute majority,” he said. About half of the votes have so far been counted.

“The support for the party started a few years ago based on the anti-corruption movement. On the back of that they won a minority government in Delhi but stepped down after 49 days because they could not pass legislation.

“That lost them a lot of support, but they maintained popularity among the poor and working class. If the lead turns out to be accurate that will mean they made inroads into the business community in the state.”

Winning power in India’s states is critical to controlling the upper house of parliament, where Modi’s party lacks a majority and has been thwarted in its effort to move reform legislation, including wider opening of the insurance sector.

Delhi is a small, although prominent state. The BJP, which has won a string of big states over the past several months is now looking to capture power in Bihar, the next state set for an election later this year.

“While Delhi is not very significant in electoral terms, a BJP loss there shatters the popular narrative around the BJP’s invincibility,” said Milan Vaishnav, an associate at the Carnegie Endowment for International Peace.

BLOG: It is AAP all the way in Delhi

“A loss in Delhi certainly signals an end to Modi’s honeymoon. Furthermore, because it is the capital city, an opposition government, especially one led by the confrontational AAP, would be a constant thorn in the Modi government’s side.”

The BJP said the Delhi election was a local poll and in no way reflected its strength in the rest of the country.

The loss of the state, however, would be the first large setback for Modi.

Spoke to @ArvindKejriwal & congratulated him on the win. Assured him Centre's complete support in the development of Delhi.

Most pundits had written off Kejriwal, especially after his party won just four seats in parliament.

But after apologising for leaving voters without an elected government for a year, Kejriwal has been the star of the campaign, outshining former policewoman Kiran Bedi who is the BJP’s candidate for chief minister.

Kejriwal’s campaign has been based around pledges to deliver lower utility bills and free wifi for Delhi’s 17 million residents, as well as promising to counter corruption. 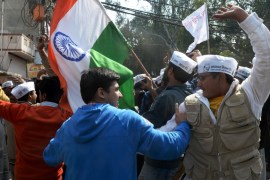 It is AAP all the way in Delhi 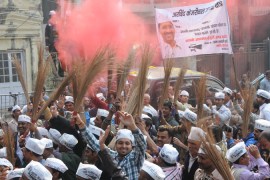 Party seeks 10 days time to take final call, as it awaits reply from Congress and BJP on 18 conditions. 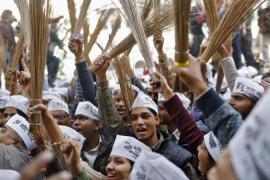 Debutant party to send 2.5 million letters, asking voters whether they should form government with Congress support. 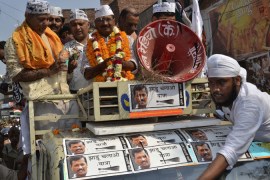 Kejriwal’s tantalising roll of the dice

Not averse to risk-taking, the AAP leader is eyeing an improbable win over Modi in Varanasi as the prize is huge.