News of the purported killing of journalist Kenji Goto by the Islamic State of Iraq and the Levant (ISIL) group has led to an outpouring of grief in the Japan.

Japanese Prime Minister Shinzo Abe was visibly affected when he addressed the nation after a video of the purported killing was released on Saturday, condemning the act as “horrendous” and “despicable”.

“We will never forgive the terrorists, and we will work with the international community to make sure they pay for their sins. Japan will not give in to terrorism,” Abe said.

In the one-minute video released by ISIL, Goto is seen kneeling before his captor, who launched into a tirade against the Japanese government, ending with “so let the nightmare for Japan begin”.

The video, which Japan believes is probably authentic, was released just days after the beheading of another Japanese man, Haruna Yukawa, whom Goto had been trying to rescue when he headed to Syria.

“I can’t find the words to describe how I feel about my son’s very sad death,” Junko Ishido, Goto’s mother, told reporters.

His brother Junichi Goto said he had been holding out hope, “but that’s not possible any more”.

“He was kind. And he was brave,” said Shoichi Yukawa, the father of the other hostage Haruna. “He went there to rescue my son.”

US President Barack Obama said the killing was “heinous”, while British Prime Minister David Cameron said Japan was “right not to bow to terrorism”.

Officially pacifist Japan has long avoided getting embroiled in Middle East conflicts and is rarely the target of such violence.

RELATED: Q&A with a German journalist who survived ISIL

“It could have happened to anyone. I am terrified. Maybe an attack could happen even here,” cosmetics company employee Tomoko Ogino, 51, told the AP news agency.

The idea that Japan was now embroiled in ISIL’s violent campaign seemed to hit hard among the country’s citizens.

“That sends chills down my spine.”

The latest video came after Japan, which had leaned heavily on key regional ally Jordan for help, said negotiations to win Goto’s release in a prisoner exchange had stalled.

ISIL had vowed to kill Goto and Jordanian pilot Maaz al-Kassasbeh by sunset Thursday unless Amman handed over an Iraqi woman who is on death row for her part in bombings in the capital that killed 60 people in 2005.

Jordan on Sunday said it will “will do everything it can” to save the pilot’s life and secure his release, government spokesman Mohammed al-Momeni told the official Petra news agency in Amman. 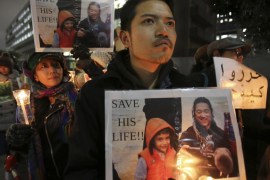 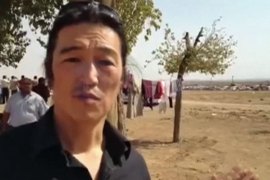 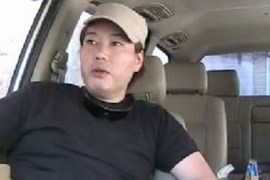