One of the world’s leading human rights lawyer has condemned Western governments for failing to put enough pressure on Egypt to free three Al Jazeera journalists who have now spent 400 days in a Cairo prison.

Geoffrey Robertson told Al Jazeera on Saturday that it was hypocritical of so many leaders to stand up for media freedoms over the Charlie Hebdo magazine killings in Paris while turning a blind eye to the same issue in Egypt.

“The success of the Egyptian tactic of locking up these journalists with lickspittle judges who do whatever the government wants and are keeping them in jail is likely to be followed by other autocratic regimes,” the British lawyer said.

Baher Mohamed, Peter Greste and Mohamed Fahmy have been falsely accused of colluding with the outlawed Muslim Brotherhood in a case that has sparked international condemnation.

After their conviction in June last year, the men were sentenced to between seven and ten years in jail.

Greste has written a letter saying that 400 days in prison “feels far too long”.

“In our case, freedom is a continual fight. On January 1, the court overturned our convictions and ordered a retrial. We still have no idea when that might begin or how long it may take,” said Greste.

“So, while we remain strong and determined to do whatever it takes to clear our names and win our freedom, 400 days still feels far too long to correct an injustice.”

Egypt’s Court of Cassation ordered a retrial one month ago, but there is still no indication of when that trial will begin.

That court examined the procedures of the initial case but we are still waiting for its full written judgement to be published.

Meanwhile Fahmy, who has Canadian-Egyptian citizenship, and Greste, who is Australian, have both asked to be deported under a new decree announced in November, but it is unclear if their requests will be successful. 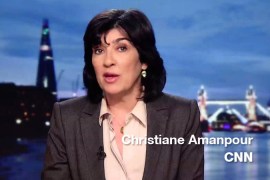 In support of imprisoned Al Jazeera staff, big names in news ask their viewers to imagine a world without a free media. 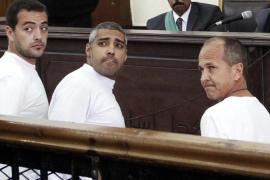 Lawyers for the three journalists imprisoned in Egypt say there were several breaches of process in their trial.