Yemen’s president has asked the Saudi-led Arab coalition to begin a seven-day ceasefire beginning on December 15.

President Abd-Rabbu Mansour Hadi told the UN on Monday that the proposed truce is to coincide with the UN-sponsored peace talks aimed at ending months of fighting that has killed at least 5,700 people.

“I have notified the leadership of the coalition of our intention to cease fire for a period of seven days, starting December 15 until December 21,” Hadi said in a letter to Ban Ki-moon, the UN secretary-general.

READ MORE: Yemen at war – ‘No side is willing to capitulate’

“This will coincide with the starting of consultations and will automatically be renewed upon commitment by the Houthis.”

Hadi’s letter confirmed remarks made earlier on Monday by Ismail Ould Cheikh Ahmed, the UN special envoy to Yemen, who said Hadi’s exiled government and the Iran-backed Shia Houthis were committed to the peace process laid down by the Security Council in April.

Ould Cheikh Ahmed urged “all parties to respect a full cessation of hostilities, effective 15 December, in order to create a conducive environment for the talks and give Yemenis respite from the violence of recent months”.

Forces loyal to Hadi, backed by air strikes and ground forces from a mainly Arab Gulf coalition, have been locked for nine months in a civil war with the Houthis, who rule the capital Sanaa and other cities.

In his letter to Ban, Hadi said: “I hope you would inform the UN envoy of the need to ensure that the Houthis would respect the ceasefire, and to take practical steps to ensure adherence to the permanent ceasefire, so that the Coalition forces would not deal with any breach of the ceasefire.”

Previous UN-mediated negotiations to end the conflict through dialogue have failed and battles continue across the country as coalition forces bomb positions of the Houthis and its Yemeni army allies.

An earlier Saudi-initiated humanitarian pause lasted for five days in May but the coalition resumed air strikes immediately after it expired, accusing the Houthis of numerous violations.

Fighting in the impoverished Arabian Peninsula country has left 21 million people in need of urgent aid. 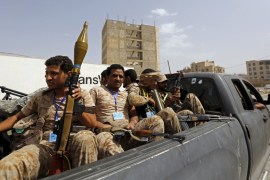