A dozen Muslim men from Myanmar have been convicted for their alleged links to a previously unknown armed group and sentenced to five years in prison, after a trial which human rights groups say was tainted by allegations of torture.

Fortify Rights, a watchdog group, told Al Jazeera on Tuesday that the 12 men from the central region of Mandalay were denied a fair trial, and that elements of anti-Muslim prejudice played a part in their case.

The men, including a 19-year-old labourer, a 34-year-old restaurant worker and a 58-year old merchant, were all found guilty on Monday of undermining national security, after allegedly training with the so-called Myanmar Muslim Army.

“I think it’s a huge injustice,” Matthew Bugher, a Harvard lawyer and Fortify Rights representative in Myanmar, said of the verdict issued by a judge at the Aung Myay Thar San township court.

“The government has not provided any evidence to support their allegations against these men.”

He said the allegations of torture openly made in court merit an investigation.

Bugher was referring to one of the court testimonies he witnessed, wherein a defendant told the judge that he was forced to sign a confession document, after undergoing torture while in detention.

“The court case against these men and their convictions are tainted by those torture allegations,” he said.

Bugher also questioned the actual existence of the Myanmar Muslim Army, saying, “the court record is so thin that we really can’t even make any analysis” of the group.

“This is the first that any of us have heard of this group. We could do a better job of assessing government claims if they actually provide some evidence that we could analyse. But they haven’t.”

During the trial, state witnesses claimed protection under the country’s Official Secrets Act as a reason for not providing more evidence to the public, arguing that the evidence had come from high levels in government, Bugher told Al Jazeera.

Separately, Phil Robertson, Asia deputy director of Human Rights Watch, told Al Jazeera that the identity of the Myanmar Muslim Army “remains as much of a mystery after the trial as before it”.

“What’s clear is that the government failed to provide sufficient evidence that these 12 men had anything to do with that group – so they should be released immediately,” he said.

A trial at which prosecution witnesses used the government laws to deflect demands that prosecutors produce evidence in court “can hardly be called either free or fair”.

He said that the case shows the danger of Myanmar’s “draconian yet vaguely defined laws”, wherein convictions are secured “for just about any act the government unilaterally finds troubling.”

He called on the incoming government in Myanmar, led by the National League for Democracy (NLD) of opposition leader Aung San Suu Kyi, to “immediately revoke” those laws, as a clear sign of reform.

Al Jazeera could not immediately reach a government spokesman to respond to the allegations.

However, in a previous interview with The Intercept, Zaw Htay, the presidential spokesman, said authorities have all the evidence against the accused.

He said that the government carried out a “pre-emptive strike” to protect the country against “any possible attack”.

From Mandalay, Fortify Rights’ Bugher warned that the most recent convictions and detentions of Muslims, “are colouring perceptions” of the Buddhist-majority country, and providing extra rhetoric to some right-wing groups.

“So we are concerned about a narrative of an extremist threat that’s actively being propagated by the government,” he said.

Bugher also said that there are “very worrying trends” among some of the nationalist movements targeting individuals, both Muslims and inter-faith activists.

“I don’t think it’s an isolated thing,” he said. “I think it’s a major concern that affects all parts of the country.”

Bugher said he expects the convicted suspects to appeal. He said that there is hope among the defendants that the incoming government led by the NLD “will take action on this case.”

U Ottama Sara, a monk at the Phaung Daw Oo monastery in Mandalay, has been working to promote inter-faith events with Muslims and other religious minorities in Myanmar.

He told Al Jazeera that prejudice against Muslims has been “a problem for a long time”.

U Ottama Sara blamed “poor education, lack of knowledge and weak civil engagement” for the Buddhist majority’s misguided perception of the Muslim minorities and Islam.

He recalled that as a child, he was made to believe that Muslims are the enemies of Buddhists. He said that he only started to question the prevailing belief when he grew up.

“I asked myself if it’s really true that they are bad people,” U Ottama Sara said.

“So I became curious and I started to make friends with them. Now I know that what I was told was not true.” 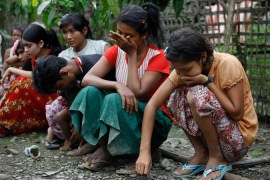