A prominent Palestinian politician has been jailed for 15 months by an Israeli military court, the military confirmed.

Khalida Jarrar – a senior member of the leftist Popular Front for the Liberation of Palestine (PFLP) and a well-known political figure and activist – was sentenced on Sunday at the Ofer military court near the city of Ramallah in the occupied West Bank.

She was arrested in April on a series of charges, including encouraging attacks against Israel and violating a travel ban.

“Jarrar was sentenced to 15 months on the charges she was arrested for a few months ago, including incitement of terrorism,” an army spokesperson told AFP on Monday.

The period since April will be considered part of her sentence, meaning she is likely to remain in jail until next summer.

The Palestinian prisoner rights group Addameer said she had also been fined $2,600 and given a five-year suspended sentence.

Israel considers the PFLP a terrorist organisation and at the time of her arrest the Israeli army said she posed unspecified “substantial security risks”.

“This is a political arrest. The charges against her are fabricated and ridiculous… There are no security reasons as claimed by the Israeli authorities,” he told AFP.

Jarrar is a member of the Palestinian parliament that has not met since 2007 after elections a year earlier were won by Hamas.

Addameer said five of the 132 members of that parliament are currently detained by Israel, including Marwan Barghouti – among the most prominent Palestinian leaders.

Qaraqe condemned what he said was a “campaign” to prosecute Palestinian parliamentarians.

In August 2014, Jarrar was ordered to leave Ramallah within 24 hours and to move to Jericho. She announced at the time that she would disobey. 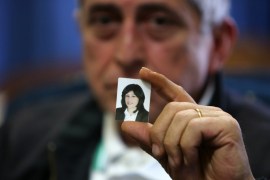